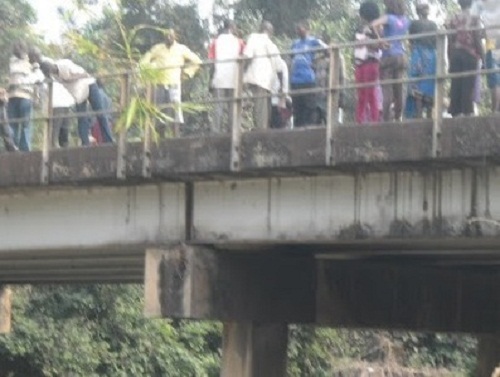 Exactly one week after the Amansea Community in Awka North Local Government Area of Anambra State witnessed the dumping of over 40 dead bodies in the Ezu River, traditionalists in the area have gone spiritual, appeasing the god of the river.

This is in a bid to avert what they believe could lead to calamity among the people, as according them, the river abhors dumping of dead bodies which formed part of its covenant with the people.

Click here for gory images we can not display on this site.

According to Benjamin Onwene, a member Igwe Amansea-in-council which is the ruling traditional cabinet of Amansea community, “our people can’t sleep any more because of the calamity that may befall us over the dumping of dead bodies in the river. Ezu River does not accept or receive dead bodies.  This is evil and our people have commenced all the traditional and spiritual rituals to appease the river so that it does not harm them.

“In the past if such a thing happens it would capsize canoes and take the lives of people and as I speak with you people have started avoiding the river because the river is angry and can take lives. We have already slaughtered native cattle and native ram to calm its spirit and we shall do more.”

Also speaking, former councillor in Amansea, Alphosus Nwene, explained that “before I was born, I was told about the Ezu River. The traditionalists in Amansea have so much belief in the river. They told us that the god of the river came out in the form of a human being and that it had covenant with our people. They gave him that space where the river is and there was an agreement that no Amansea son or daughter would get drawn in the river and we would not dump dead people there too.

“There was a time a small boy was killed by a ritualist and dumped  in the river; Ezu threw him out and sent words that he was not responsible for the boy’s death and later the culprits was apprehended, because Ezu identified him.”

Also speaking, the chief priest of Amansea, Ezeani Nna, recalled that the spirit behind Ezu River came as a man and asked for a road to pass through, as according to it. It was at Nnoke Munede’s house it appeared as a bearded man to negotiate how he could pass through and we discussed with it and we gave it a path.

“Ezu told us that he has a gift for Amansea people, adding that no one should come out at night. That night there was a heavy wind and trees were falling. Soon, we had the sound of a fast-flowing river all the way from Mmaku to Ishiagu from Ishiagu to Amansea and it has not been resident in Amansea then. It also sent us a message that when we wake up we should go to a big Achi tree. And when we got there we saw several species of fish as a gift to our people and we saw the river flowing and that was how we knew that the spirit behind the is called Ezu.”

At the river bank on Friday, local fowl eggs were assembled by unknown persons with white and red pieces of cloths and Saturday Independent gathered that individuals and family units have commenced preliminary cleansing.

The Anambra State Police Command has described as untrue insinuations by a section of the Public that the over 40 dead bodies dumped in Ezu River were perpetrated by some officers and men of the command.

According to the state’s Commissioner of Police, Bala Nassarawa, investigations are going on and that any early statement made about the incident would affect the exercise.