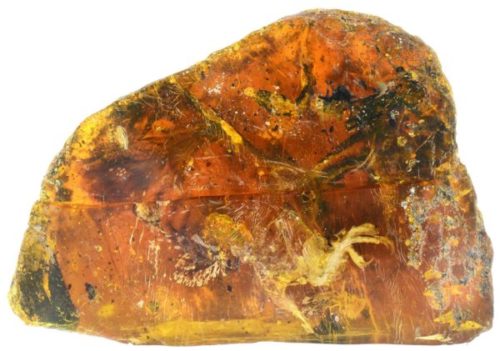 In 2014, a Burmese Amber (tree resin) fossil dating back 99 million years was discovered in Myanmar. The fossil was exhibited in museums in 2017. The fossil, which was initially thought to be a saurian by many, contained the remains of a newly-hatched bird. As a result of studies carried out by researchers from China, the US and Canada, it was stated that the fossil belonged to the Cretaceous period (145 to 66 million years ago); the bird’s neck, skull, clawed foot and a partial wing were preserved in the amber. However, the scientists stated that the tissues in the fossil are damaged and there are no usable DNA samples.

This bird fossil, called “Belone”, is thought to belong to an extinct major group of birds who had teeth in their beaks and clawed fingers on their wings and belonged to the Cretaceous period in which the dinosaurs existed. This extinct bird species, which is also known as enantiornithes (toothed birds), has only three characteristics that distinguish them from today’s birds. These characteristics include that they had teeth in their breaks, clawed fingers on their wings and different type of wing connection. Apart from these, they show the same characteristics with today’s birds.

Evolutionists try to present some bird species that are similar to the aforementioned fossil, as living beings with “underdeveloped flying skills” by asserting that they had teeth in their beaks and clawed fingers on their wings. They introduce these creatures as a so-called “intermediate form” between dinosaurs and modern birds. Nonetheless, the toothed and clawed birds which lived in the past had remarkable flying skills. The presence of teeth and claws doesn’t make that bird an intermediate form. The toothed birds are extinct today, but babies of Tauraco corythaix and Opisthocomus hoatzin species, which exist today, also have claws on their wings. These birds are excellent flyers.

If you pay attention, Belone is a newly-hatched bird and has claws on its wings. Today’s Tauraco corythaix and Opisthocomus hoatzin hatchlings have claws on their wings too. The hatchling, still incapable of proper flight, can hide from predators by climbing among dense tree branches thanks to these claws. Hence, the reason for the inability of the aforementioned living being to fly is not because it is an intermediate form as claimed by evolutionists, but because it is a baby. The living being’s ability o fly develops within three or four weeks. Now that the hatchling can fly, it does not need the claws. After this stage, as the Tauraco corythaix and Opisthocomus hoatzin approach adulthood, the claws would fall off their wings after a while, so these claws are no longer found in adults. This rejects the unfounded claims of the evolutionists and shows a miracle in creation. The claws are vital when young, but there is no need for them afterwards. Although the living being has the same genetics both in babyhood and adulthood, the genetic information is used in a great way at the right time and in the appropriate way.

It is most likely that the claws on the hatchling Belone were the type that fall off in time. The existence of Tauraco corythaix and Opisthocomus hoatzin proves this to us. More importantly, the presence of claws in the wings is presented as a reason for introducing the living being as an “evolving creature”. The presence of claws in the wings of a creature does not prove that the creature is incapable of flight. This is nothing but mere speculation that evolutionists, who are used to demagogy, have used for years instead of science.

Before Belone, there was little information about birds that existed in the Cretaceous period, so the evolutionists – as a requisite of their imagination and their ideology- made all their comments on the subjects about which there is no evidence, in favor of the so-called evolution. They have introduced birds with different anatomical characteristics, such as Archeopteryx, as so-called “transitional forms”. The claims about this matter came to an end with the successive discovery of Archeopteryx fossils, and especially with the discovery of a fossil preserved along with soft tissues inside an amber. All the anatomical features of Archeopteryx scientifically documented that it is a perfect flying bird. As you might recall, Archeopteryx is a clawed bird as well.

The feather structure of “Belone” is also frustrating for evolutionists. Because complex structures such as feathers and wings should exhibit a gradual development according to evolutionist logic; evolutionists claim that the so-called primitive birds should not be fully capable of flight, and that there should be a number of impediments in their wing and feather structures that restrict proper flight. Despite the fact that Belone is a newly hatched bird, it has primary and secondary flight feathers asymmetrically arranged with features providing excellent aerodynamics, as observed in today’s birds.  In other words, the anatomical structure providing the aerodynamic characteristics of the feathers has not undergone any changes for 100 million years. This is one of the most significant blows dealt to the theory of evolution.

Although Belone is a newly hatched bird, it still has feathers suitable for flight. Today’s birds usually do not have feathers suitable for flight when they hatch. They need the care of their parents for a certain period of time. The flight feathers begin to form after a while. This is not because they are primitive creatures, but because they are babies. This type of feature is very similar to the Australian brush-turkey (Australian megapodes) which exists today. It has been observed that Belone has excellent and intact feather structure that will allow it to fly just like the Australian brush-turkey hatchlings. Australian brush-turkey hatchlings’ unique characteristic that separates them from other modern birds is that they do not need special care from the parents after they hatch; that is, the hatchlings come out of their eggs with all the characteristics that will enable it to survive. Again, unlike other birds, Australian brush-turkey eggs are placed not on the trees but on nests built in the soil by the father turkey and kept at a constant 33°C. The newly-hatched baby must immediately climb the trees and acquire the ability to fly to be protected from danger. For this reason, it has feathers that enable it to fly from the first day. The fact that the feathers of Belone are also suitable for flying shows that it does not need much parental care after it hatches. The fact that a baby bird hatches with the characteristics enabling it to survive on its own is another miracle of Creation and refutes the claims of evolution.

Briefly, with its flying ability and anatomical structure, “Belone” has the characteristics of an excellent bird. It has no half, missing, dysfunctional organ or structure. Furthermore, it shows similar anatomic characteristics with Tauraco corythaix, Opisthocomus hoatzin and Australian brush-turkeys which exists today.

The discovery of the fossil of a living being, which existed 99 million years ago with the characteristics of a fully developed bird, clearly shows that birds existed during this period and did not evolve from flying dinosaurs.