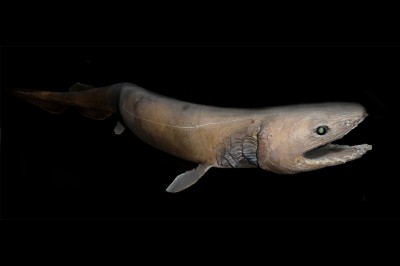 Recently, reports appeared in the press stating that a prehistoric shark had been caught in Australia.

Fishermen trawling near Lakes Entrance in southern Victoria hauled up a fish  from a depth of 700 meters, one that resembled no fish they were familiar with. It resembled an eel in overall appearance and had 300 very sharp teeth set in 25 rows. Investigation showed that this fish was a Frilled Shark known as Chlamydoselachus anguineus.

This shark was first described by the German Ludwig Döderlein on a visit to Japan in 1879. It is a rare bottom-dwelling fish, typically found at depths up to 1,500 meters in a number of seas all around the world.

Paleontology provides us with more important information about this fish; it has remained unchanged for 80 million years. With its unique six pairs of frilled gill slits and up to 300 razor-sharp teeth, it has neither turned into any other species nor undergone the slightest change. The Frilled Shark is therefore described as a Living Fossil in the scientific literature.

Why a living fossil? Because the theory of evolution maintains that this fish should have had fewer characteristics than it has now and have undergone various changes over millions of years, or at the very least, it should have long ago become extinct. Yet its appearance is just the same now as it was on the first day, and it is still living in various parts of the world.

As documented in the Atlas of Creation, this applies to countless life forms: Species do not change, even over millions of years. No such process as evolution has ever happened in the history of living beings. The Frilled Shark, which has remained the same for 80 million years, is further scientific evidence of this.