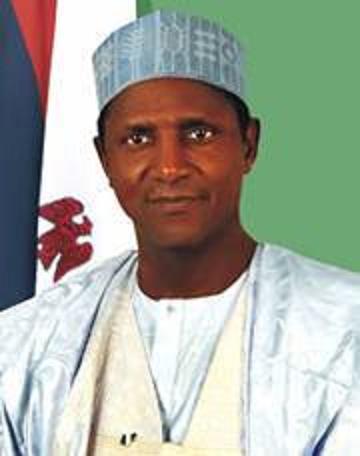 “Frankly speaking, one thing, one legacy I would want to be remembered most for and I know it is very difficult to achieve, but that I am determined to achieve it is the establishment of respect for the rule of law.” ~ Umar Musa Yar’Adua (President of Nigeria May 2007-May 2010)

Last week Tuesday of May 5, 2015, marks exactly 1,825 days, precisely five years since the demise of President Umar Musa Yar’Adua who was lost to the cold black hands of death on May 5, 2010 at the age of 58, due to a Chronic Renal Disease (CRD) combined with Pericarditis (an inflammation of the fibrous sac surrounding the heart). He died in Aso-Rock presidential villa, just days after his return from the Kingdom of Saudi-Arabia where he was hospitalized for several months.

Late Yar’Adua was born into an aristocratic Fulani family in Katsina state; he’s a son to a former Minister during the First republic and held the royal title of “Mutawallen Katsina” (custodian of the treasury) of the Katsina Emirate). Yar’Adua started his education at Rafukka Primary School in 1958, and moved to Dutsen-ma Boarding Primary School in 1962.

He attended Government College Keffi in Nasarawa state from 1965 until 1969. In 1971 he received a higher School Certificate from the prestigious Barewa College Zaria (a famous school that produced five Heads Of States/Presidents of Nigeria and almost all successful Nigerians especially those of northern background passed through the college). The young Yar’Adua then moved to Ahmadu Bello University also in Zaria from 1972 to 1975, he obtained a B.Sc degree in Education and Chemistry. He again returned to the same Ahmadu Bello University in 1978 and obtained a masters degree in Analytical Chemistry.

Yar’Adua pursued a successful working career from several governmental to non-governmental organizations, he held several positions both in public and private service. He taught in various academias; he was a lecturer at Katsina College of Arts, Science and Technology, Zaria between 1976 and 1979. He moved to Katsina Polytechnic also as a Lecturer in 1979 and was there until 1983 when he left the public service and moved into politics during the third republic. In 1999, he was elected Governor of Katsina state under the platform of People’s Democratic Party (PDP) and ruled for eight years, after which he contested in the April 2007 presidential election, he won the hearts of Nigerians with his self-esteem and was elected President of the federal republic and took the oath of office on May 29, 2007. Following his presidential victory, Yar’Adua became the first Nigerian president with a bachelor and masters degree.

Today, I am idolizing the life and achievements of an honest and a committed democrat; a God-fearing leader and a great patriot who believed in justice and did all within his power to move Nigeria to where it ought to be, and a selfless servant of God and humanity.

President Umar Yar’Adua was widely known for his campaign slogan: “forward ever backward never”, his zeal to move Nigeria forward led him to govern with integrity and tenacity. He started his administration by reducing fuel prices to ease the suffering of the masses and established various reform programs that impacted positively on the life of the common-man. There was never a time when any Nigerian President pursued the nation’s interest ahead of self-interest like Yar’Adua, he took several courageous decisions; including the creation of the Niger Delta ministry for which the people of the south-south remain eternally grateful, and ending the long lingering security threats experienced in that region by granting amnesty to militias which brought an end to bloodshed and oil bunkering in the oil-rich south-south.

Albeit a product of a corrupt and an unfair election process that was grotesque by numerous irregularities, Yar’Adua was able to convinced everyone and left nobody in doubt that he’s indeed the right man for the crown, he proved to the whole world that he’d more than the qualities required to take Nigeria and Nigerians to the moon, with his great contributions to the sustainability of peace and democracy in the country and most importantly, the unity of the nation and beyond. He left behind credible memories that serves as inspirations for many generations to follow.

We lost an honest leader that meant well for all Nigerians, his record of prudence and administrative excellence both as a State Governor and President will forever remain green in our memories. He demonstrated great statesmanship, which helped to re-focus our dear nation, and among his legacies; was the imperative of electoral reform, over which he took significant and perfect measures in setting up the Justice Mohammed Uwais Panel, a reform that is now shaping our country’s democracy and beyond.

His set goals; the “Seven-Point Agenda” highlighted the zeal in him for a greater and a more peaceful Nigeria, he worked tremendously and tirelessly to achieve these set goals before leaving office, and during the short period he breathed as president, he brought several good wills to Nigeria both socially and economically. He has good plan for Nigeria’s progress but unfortunately, his health factor obviated him from achieving what he connoted to achieve.

He’d wanted to replicate the brobdingnagian anabasis he put in place when he’s the governor of Katsina state but sorrowfully, “Azrael” (the unfriendly angel of death) came knocking and helplessly took away his soul at a very critical moment in our national development when Nigeria needed him the most but nevertheless, God needed him more than we do and that was why He took him away from us. It is heartbroken that he is gone and as humans, we can’t help or do otherwise rather than to wish him a peaceful and blissful eternal rest in the acre of God and a joyful life in the city of the dead.

Nigeria and Nigerians have missed a kind gentleman who’s committed to the ideals of sustainable democracy, rule of law, accountability and nation building. We have indeed lost a committed leader who is a mentor and role model to several Nigeria’s upcoming generation, a leader who was ready to reform all sectors of the economy for the betterment of the life of the common man.

Finally, let’s not forget that the only gift you can give to the dead is prayer and nothing more, you pray for the soul of the dead whenever you think of them or something reminds you of them, this is indeed the biggest gift to the dead not praise-singing. I hope this piece remind you that late President Umar Musa Yar’Adua is resting down underneath the ground and he’s begging for blessings? If yes, then the only way to show him love and appreciation for his selfless service to our nation is to pay him back with prayers and that’s exactly what I set to do.

Please repeat after me: “O God! The God of Muhammad (PBUH) and the God of Jesus Christ (PBUH), Our former President ‘Umar Musa Yar’Adua’ is under Your care and protection, protect him, forgive him and have mercy upon him, excuse him and pardon him, and make honorable his reception. Expand his entry, and cleanse him with water, snow, and ice, and purify him of sin as a white robe is purified of filth. Exchange his home for a better home, and his family for a better family, and his spouse for a better spouse. Admit him into the garden of Paradise, protect him from the punishment of the grave and the torment of the hell-fire. Forgive and have mercy upon him, surely You are The Oft-Forgiving and The Most-Merciful.” let me hear you say “AMEN”!