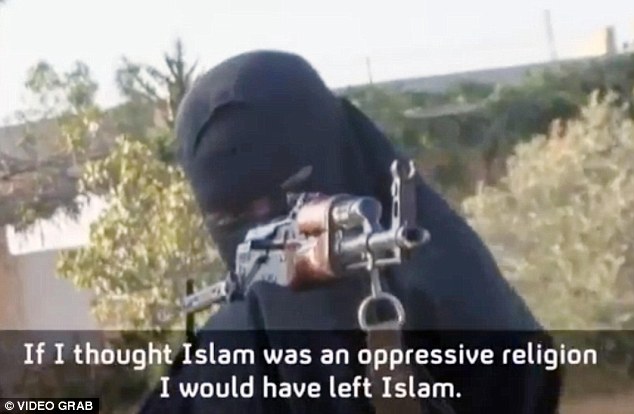 By RUTH STYLES FOR MAILONLINE

She was among the first Britons to join the terrorists of Islamic State and regularly takes to Twitter to issue violent threats, including one in which she spoke of her wish to become the first woman to behead a Westerner.

But despite all that, Khadijah Dare’s heartbroken mother Victoria has used her first ever interview to call upon her daughter to return and says she wants her only child in her life.

Mrs Dare, from Lewisham in South London, also revealed that her daughter had been an equally devout Christian as a child but turned to Islam while at college.

‘She loved church,’ said Mrs Dare in an interview due to be screened tonight as part of a BBC documentary.

Dare, who was born in Nigeria but emigrated to the UK as a child, was originally christened Grace but, says her mother, the 22-year-old changed it after she began attending services at the Lewisham Islamic Centre – a mosque also linked to the Lee Rigby killers.

‘When she became Muslim, I would get these phone calls saying, “Can I speak to Khadijah?” I said to her, what’s that about?

She says, “Oh, that’s my name”. It was only the mosque people who called her Khadijah. I don’t call her that.’

Now living in Syria, Dare, who married a Swedish IS terrorist calling himself Abu Bakr almost as soon as she arrived, has reportedly been widowed. Threats: Dare, who is in Syria, is notorious for threatening to become the first woman to behead a Westerner Nevertheless, she continues to spread IS propaganda online and has been accused of encouraging other young women to travel to the Middle East, much like fellow British jihadi bride Umm Layth.

Umm Layth, who was unmasked as a Glaswegian teenager named Aqsa Mahmood last year following a MailOnline investigation, has even offered advice to would-be jihadis on what clothes to bring and what they can expect from life with IS.

But her family’s lawyer, who appears on BBC documentary Britain’s Jihadi Brides alongside Mrs Dare and Renu Begum, sister of one of the three missing Bethnal Green schoolgirls, says the reality is very different.

‘They are like paedophiles. They are groomers. They are getting their claws into people and ripping them away from the families who love and care about them.’

Mahmood, who, say her family, was once a ‘kind, caring individual’ and a ‘loving young woman’, is now helping to radicalise would-be jihadi brides herself, as well is issuing threats and encouraging Muslims to take up arms.

‘Follow the examples of your brothers from Woolwich, Texas and Boston,’ read a tweet posted last summer. ‘If you cannot make it to the battlefield, then bring the battlefield to yourself.’

Another blog post claimed that within two generations, the world would be under the heel of an ‘Islamic Empire’.

‘Know this Cameron and Obama, your countries will be destroyed and your kuffar [non believers] beneath our feet,’ wrote the 20-year-old.

‘If not you, then your children or your grandchildren. This Islamic Empire will be known and feared worldwide and we shall follow none other than the law of the one and only Allah.