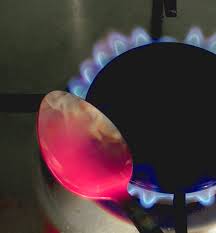 Pastor Fine Oru, who reportedly burnt the face of her 10 year old niece, Grace Opion, with a hot spoon, has been arrested by Police from the Azikoro Police Division in Bayelsa.

Oru is the Assistant General Overseer of the ‘Heart Beat of God Bible Church,’ on Ompadec road, in Yenagoa,

Oru, 46, hails from Otueke, the Ogbia local government area of Bayelsa , and resides at the Egbenda community, off Ox-Bow road, in Yenagoa.

Opion, according to Oru, is the daughter of her younger sister, who is a pupil at Kingdom Success Academy, within the neighbourhood.

Oru, who said she has been a pastor for 16 years, said that she had left her one year old grandson in the care of the girl, and travelled to Otueke, on Friday, for a burial.

She said it was early Saturday morning that she noticed that part of the boy’s face was burnt, and the boy told her it was the girl that was responsible.

According to her, when she asked the girl what happened,  the young girl told her that she had used the spoon to slap him, as they were cooking.

”I said okay, don’t worry. What you did to him, I will also do to you. As I was trying to do to her, the same thing, she was struggling.

“I and my sister, we were telling her to keep her face steady so that the hot spoon will not touch all her face, but she refused. So the thing now burnt her face like this,’’ the pastor said.

The pastor abandoned the girl, leaving her in pain, and even the boy she claimed was also burnt, and she went on to the market.

It was the cry of the girl in pain that drew the attention of neighbors, who in turn alerted the police.

In the re-telling of the story, Opion said that while she was cooking, the little boy picked the spoon up where she kept it, and touched it on his face.

Before the arrival of the governor’s aide, police officers from the Azikoro Division were already on ground to carry out the arrest the pastor.

The SSA to the Governor described the pastor’s behavior as “wicked.”

She said it was because of incidents of this sort that prompted the setting up of a committee on violence against women and the girl child, by the Governor.

”The Governor has said no longer should people treat children with cruelty.

“This is not right. How can a woman put a spoon on the fire, and burn a child’s face?

“There is no reason for that. You can see that the child’s face is already disfigured.

”This is wickedness. There are better ways you can train a child. It is because she is not her biological child; that is why she is treating her like this.

“So we can’t take this. She is going to be charged for violence against this child.

”We are going to trace the parents of this child. We are going to ask them why is this woman, living with this child? You never can tell, this child might be a sister, or a relation to this woman. And maybe she said she wants to help,” Konodufaowei said

The SSA said that it was advisable that those who can no longer keep other peoples’ children to take them back to their parents.

”If the child gives you so many headaches that you can’t contain the child, you return the child back. That’s what we always advise.

”And for those parents who give their children out, and don’t care to know about their welfare, whatever happens to the children, we get them also involved, and arrest them,” Konodufaowei said.

She described the girl as “an emergency case,” saying she would first be taken to the hospital, before contacting her parents.

The Police Public Relations Officer in Bayelsa Mr. Alex Akhigbe confirmed the incident, and said that he had detailed the Azikoro Division to arrest the pastor immediately, once he had gotten wind of it.

He said that investigation into the incident continues, and will so in the coming days.