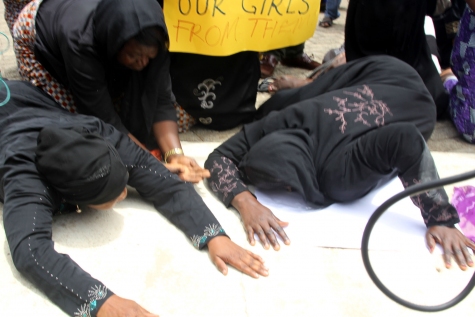 The Nigerian government has been criticised locally and international for its handling of the kidnapped girls.

The Commissioner of Police in Abuja, Joseph Mbu, on Monday announced a ban on all protests, in the Nigerian capital, to demand freedom for the over 250 schoolgirls kidnapped in Chibok Borno State, the News Agency of Nigeria reports.

The protest, though popular among several Nigerians, has been a source of worry for the Nigerian government, with the Information Minister, Labaran Maku, announcing last Wednesday that the protesters were sponsored by the opposition All Progressives Congress.

President Goodluck Jonathan had, in a speech read to the protesters when they tried to march to the Presidential Villa, asked the protesters to direct the anger at the Boko Haram and not at his government.

The Nigerian government has been criticised locally and international for its handling of the kidnapped girls, who were abducted from their school on April 14.