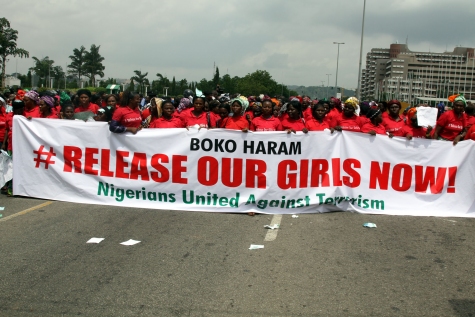 A mammoth of crowd of  rented women protesters under the aegis of “Nigerians United Against Terrorism” surfaced in Abuja today at staged managed  protest rally, the group called on the Boko Haram  to release abducted Chibok High School Girls  kidnapped by boko Haram militants some 40 days ago..

The crowd which cut across various categories of people including women, youths, motorbike riders, truck pushers and all manners of characters were at the stage-managed rally.

The protesters were conveyed to the Federal Secretariat in large numbers inside government owned buses popularly known as “El-Rufai” with various placards  with inscription “#Boko Haram Release Our Girls  Now”. To legitimize their action they dressed up in red Tshirts  with the same message written at the back of the shirts.

The rally which was led by a People’s Democratic Party (PDP) member of House of Representatives, Beni Lar and a President of the Market Women Association, Felicia Sani were received at the Military Arcade opposite Eagle Square by the Chief of Defense Staff , Alex Badeh and other top military officials.

The CDS used the occasion  to inform the protesters that the Nigerian military have now located the abducted girls.He didn’t reveal their exact location but said the military will not likely use force to free the girls.

It was gathered that the rally was organized and funded by the government under the cover of “Market Women Association” and “Nigerian United Against Terrorism.”

Coordinators and protesters of different groups were later asked to move to  the Old Parade Ground where they were paid. Not less than fifty high capacity buses were sighted at the event.

The protest was organized to counter and discredit the globally acclaimed  #BringBackOurGirls campaign which was led by the former Minister of Education, Oby Ezekwezili and other human rights activists across Nigeria.

It would be recalled that a Presidential delegation received the protesters of #BringBackOurGirls at the  same Eagle Square last week  Thursday where the organizers asked ten questions and demanded  for the answers but the president’s response to the demands of the protesters was evasive as he could not answer any of the questions put across to his delegates rather he told them to direct their protest to the abductors of the Chibok School Girls (Boko Haram) but not him. The protest today did exactly that.

Last week letter from President Goodluck Jonathan was read by the Minister of State for Federal Capital Territory(FCT), Ms. Olajumoke Akinjide, the letter however,  infuriated the protesters who left the venue disappointed.

With today’s rally, it seems a battle line have been drawn between the original campaigners and the fake #BringBackOurGirls  protesters . There were no foreign journalists at the event but the NTA and few media houses were seen covering the rally.