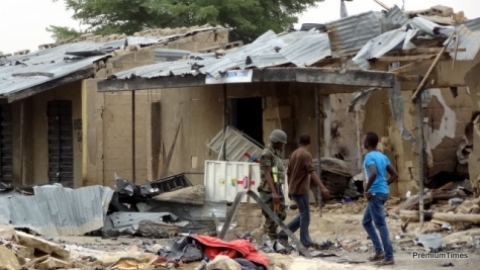 The Nigerian president is so insensitive, full of himself and wickedly myopic. He again repeated the bullocks that ‘Boko Haram is trying to bring down his government,’ Sunday. Who cares about his government or the lack of it? Boko Haram is trying to bring down the northern farmers; the only resource in the north. Boko Haram is a straight forward plot and ploy against farmers in the north of Nigeria. It has so far attacked and left over 55 farming villages desolate in Borno alone this year. 3 million farmers have been internally displaced, hiding in cities leaving their farm land.

Boko Haram is a war against the north, northern life and economy with a so-called ‘Southern” president in charge. What does that tell us? This president who has armed a Governor Tompolo army is trying his best to destroy the north, Muslim and Christian alike, he does not care, he simply hates the north. Who are they fooling, that Boko Haram does not know the Niger bridge? and has focused 100% of its attacks on northern farmers, traders, religious establishments and life in general.

Boko Haram is a secret war against farming in the north and the President of Nigeria is supervising this then telling the nation nonsense about ‘bring down his government.’ He obviously does not care about the farmers and the reports of soldiers being involved in this war against the Northern farmer, in so many instances being told to stand down and watch the farming villages being destroyed, most recently of the soldier who said he Nigerian military actually provided helicopter support to the Boko Haram invaders, supports evidence that the president is behind this malicious plot for the last four years. The farmers need to rise up and fight back.