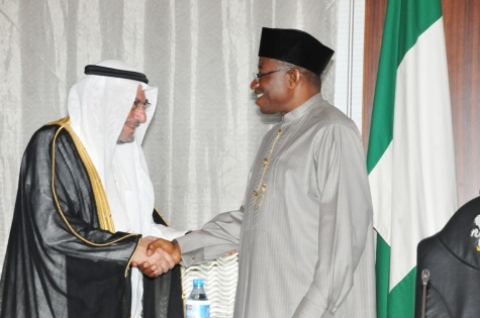 The Organization of Islamic Conference (OIC) on Monday publicly expressed its support for Nigeria’s fight against terrorism, saying members of the Boko Haram Islamist sect are criminals and outlaws that should not be considered as Muslims.

OIC Secretary-General, Eyad Ameen Madani said this on Monday at the Presidential Villa when he led a delegation to meet with President Goodluck Jonathan.

According to Madani, the 57-member organization would continue supporting Nigeria’s efforts to address its terrorism challenge.

“We are here to express our solidarity with Nigeria in facing up to this terrorist organisation and to condemn the terrorist acts they have been committing, and to show our condolences to the Nigerian people, to the families of those who were affected”, he said.

“The OIC has issued statements that are very clear, that these people are outlaws, what they do is criminal act; it has absolutely nothing to do with Islam, Islamic teachings, the religion of Islam, the history, the culture, the civilization of Islam and we should identify them for what they are as a terrorist group”.

In addition to listening to the president, Madani said OIC offered to help in terms of expressing support for the government, and getting actively involved in facing up to the terrorists.

“OIC can be involved in many ways because the crisis is multi-dimensional”, he said.

“If the Nigerian government would allow it, we will convene an inter-faith dialogue, which will show many aspects of similarities between not only Christians and Muslims, but between all faiths and convictions”.

Minister of Foreign Affairs, Aminu Wali, thanked the organisation for supporting the government, saying the step is proof OIC’s role in supporting any of its member-states that has any problem, either socially, economically, religiously or otherwise.

“So this is something that should be a message to every Nigerian that OIC is a body that is willing and able to come to the aid of its member states, as is explained by the secretary-general”, he said.