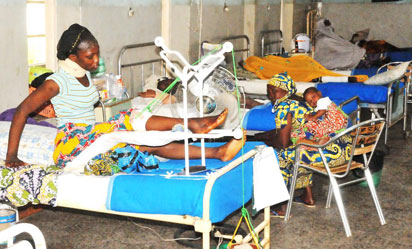 Three days into the ongoing strike by public sector doctors, patients abandoned in hospitals nationwide, yesterday, cried out that they were dying slowly, and prayed for God’s intervention to settle the rift between the government and the striking doctors.

While Governor Babatunde Fashola of Lagos State appealed to the doctors to stop using strike as a means of fighting for their demands in the interest of innocent Nigerians, the doctors on their part accussed government of playing hide-and-seek with them.

Meanwhile, the House of Representatives has mandated its Committee on Health to urgently engage the Nigerian Medical Association, NMA, and Ministry of Health with a view to bringing the ongoing industrial action to an end.

New patients were denied admission, while elderly ones who refused to leave were offered skeletal services by nurses and other health workers not affected by the strike.

Some of the patients were seen praying for God’s intervention.

At the National Orthopaedic Hospital, Igbobi, Lagos, patients stood in front of Accident and Emergency Unit, praying to God to touch the heart of both government and the striking doctors.

One said: “Our God in heaven, listen to our cry and come to our aid. Arrest the heart of doctors and government to end the strike. We are dying slowly on daily basis.”

At other wards, some patients that spoke to Vanguard insisted that whether the strike continued or not, they had nowhere else to seek medical attention.

They claimed their medical needs were peculiar and could not easily be handled at private hospitals.

One of them, who identified himself as Clement Odia, and had been on admission since January, said he was not in a hurry to relocate to any private hospital for financial reason.

He said: “I came here since January because of my broken hand. You do not expect me to leave now because I am almost healed. If I have to go to private clinic, where is the money? Also, they may not be able to take care of my situation, so I am staying here.”

Another patient, who spoke on condition of anonymity, accused doctors of aggravating his pain.

He said: “I know if government answers them, in another six months same doctors will ask for more allowances. No doctor has attended to me since yesterday.”

He queried why government should agree to make other professionals, who are not doctors, as consultants?

“Everyone knows what consultant stands for in medicine. What will a nurse or pharmacist be consulting? Do they own patients in the hospitals?”

Also speaking, Public Relation Officer, NMA Lagos, Dr. Peters Ogunjobi, accused government of playing hide-and-seek with doctors, saying the strike would continue since the government had decided not to listen to the doctors.

Meanwhile, Governor Fashola has appealed to the doctors in the country to stop using strike to fight for their demands in the interest of innocent Nigerians.

Fashola spoke at the second convocation ceremony of the Lagos State College of Health Technology, Yaba, saying fatalities from such industrial actions negated their professional calling.

Fashola argued that those that invented strike in the Nigeria health sector did it for the sake of their patients not themselves.

He said: “Medical workers from the lowest level to the highest in the chain of command and team are like gods on earth. Only sick people know your importance.”

Fashola noted that workers in other sub-sectors of the nation’s economy were not satisfied with their remuneration, but did not hold government to ransom.

Also, the House of Representatives yesterday waded into the strike as it mandated its committee on health to urgently engage NMA and the Ministry of Health with a view to bringing the industrial action to an end.

The House, in plenary, gave the committee two weeks to report back.

The House, while appealing to NMA and its members to call off the strike, also urged the Federal Government to do everything possible, as a matter of utmost urgency, to have the crisis resolved in the interest of Nigerians.