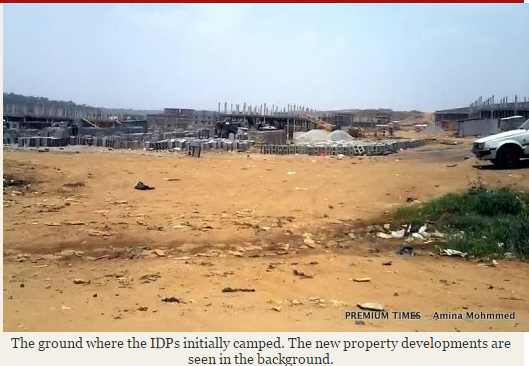 On a Tuesday morning, as the neighbourhood awakened, Mary Paul, pregnant with her seventh child, sat on the pavement at the front of her ramshackle makeshift apartment with a list in her hand as she watched one of her children munch a stick of boiled corn for her breakfast.

Behind her was a small dingy room. She shares the space with nine other family members. Their baggage, packed in Ghana-must-go bags, stacked in a corner of the room.

Down the road is a massive construction of luxury housing projects that will later define the emerging Waru District in Abuja. Back in January, Mrs. Paul and at least a thousand other refugees camped at the grounds opposite the construction site. They had all travelled long distances to converge on Waru after they fled heavy Boko Haram attacks in Adamawa, Borno and Yobe, all in northeast Nigeria.

Shortly before President Goodluck Jonathan visited the district to flag off the housing projects in January, city officials moved in with bulldozers and evicted them. The camp was razed and the grounds cleared to create a beautiful scenery for the president’s visit.

No new camp was provided for the refugees, now displaced a second time.

Her story is similar to that of many Internally Displaced Persons in Waru. Their  communities and farmlands were destroyed by insurgents.

After the second displacement by the Abuja authorities, many of the refugees flooded the Waru village putting pressure on extremely scarce resources.