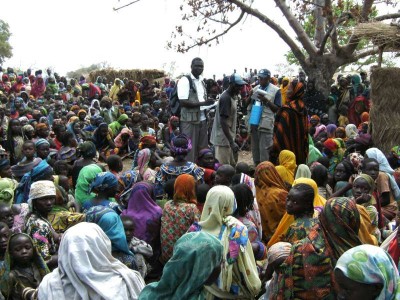 With 3.3 million internally displaced persons (IDPs), Nigeria has the largest population of persons displaced by conflict in Africa, a report released last week has revealed.

The report, “Global Overview 2014: people internally displaced by conflict and violence,” by the Internal Displaced Monitoring Centre (IDMC) and the Norwegian Refugee Council (NRC) stated that the number of internally displaced persons in Nigeria is approximately a third of the IDPs in Africa and 10 per cent of IDPs in the world.

While the report noted that displacement is caused by a connection of interrelated factors, it highlighted violence, flood and storms as the main cause of displacement in Nigeria.

“Violence, abuses, and forced evictions all add to the conflict-mix in many of these situations, while in places such as Nigeria we see how challenging life becomes for those already displaced by conflict when they are struck down again by severe floods and storms.”

According to the report, 470,500 persons were displaced in Nigeria in 2013 alone placing it as the country with the third highest number of displaced persons in the world. Nigeria is only ranked behind Syria with 6.5 million IDPs and Colombia with 5.7 million IDPs.

The report observed an increase in attacks by the extremist Boko sect Haram, heavy-handed counter insurgency operations and ongoing inter-communal violence as reasons for the unprecedented rise in IDPs in Nigeria in 2013.

After Boko Haram militants were pushed out of major towns in the North East following the declaration of a State of Emergency a year ago, they focused their attacks with increased brutality on towns and villages close to Nigeria’s borders with Cameroon, Niger and Chad.

According to the Nigerian military, Boko Haram killed more than 1,500 people in the first three months of 2014 alone and more than half of those killed were civilians.

The increasing deadly attacks on border communities and the destruction of properties, businesses and farmlands has forced many inhabitants to flee their homes to nearby towns and villages. Some have even fled into neighbouring Cameroon and Niger.

The United Nations Office for the Coordination of Humanitarian Assistance (UNOCHA) said 300,000 people in Borno, Yobe, and Adamawa states – 70 percent of them women and children – have fled their homes since early 2013.

In March, residents of Mafa, a village in Borno, fled their homes upon receiving letters from Boko Haram warning them of impending attacks. When the attack eventually happened there were only the aged and those too weak to flee left in the village.

Inadequate relief measures by the government meant that many of those requiring support could not get it. According to the National Emergency Management Agency (NEMA), 35 per cent of health facilities in rural area in Borno have either been destroyed by Boko Haram or forced to shut down for safety reasons leaving injured or infirmed displaced people in more precarious conditions.

Reprisal attacks on communities accused of sheltering Boko Haram insurgents by the Nigerian armed forces have also added to the number of displaced people in the north east, the report said.

Soldiers have been accused of sacking whole communities and destroying the homes of Boko Haram suspects or alleged sympathisers. In 2013, soldiers allegedly sacked the town of Bama killing 200 civilians after an attack by suspected Boko Haram insurgents on an army checkpoint that left one soldier dead.

Escalating communal clashes in different parts of the country has also resulted in many people fleeing their homes and properties. Clashes between farmers and herdsmen over grazing lands in states such as Benue, Taraba, Zamfara and parts of Kaduna have left a bloody trail, with its attendant destruction of properties, farmlands and whole communities.   Human Rights Watch (HRW) said more than 1,000 people have been killed in communal clashes since last December.

“The violence has been almost on a daily basis in some places like Benue State and in a few other places you’ve had it almost on a weekly basis,” said HRW Nigerian Researcher, Mausi Segun.

The Zamfara State government recently said more than 300 people in the last 20 months were killed in attacks on villages in the state.

In Benue, NEMA said more than 100 villages were sacked by suspected Fulani herdsmen this year alone. Earlier in April, the agency set up 11 camps for over 100,000 people displaced in eight local governments in the state.

Also, many of the victims of flooding caused by heavy rainfall across the country in 2012 are yet to be provided permanent place of residence. Flooding in that year alone displaced over two million people according to NEMA.