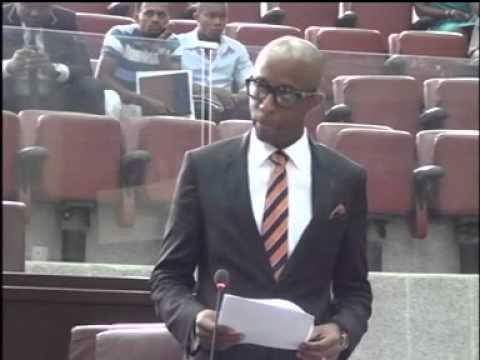 Dear Barr. Onofiok Luke, featured, you may be wondering why I am not addressing you with the appellation “Honourable” which is now mischievously ascribed to every vagabond that finds his or her way into the Legislature. The reason is that people shouldn’t be addressed as Honourables just by the mere fact of their membership of the Legislature. People should only be addressed as such if they do honourable things.

I could have easily reach out to you privately to express my concerns but I want to have witnesses. I have always refused to tackle you or comment on issues that affects your interest directly or indirectly. Not because I stand to lose anything if I do otherwise. My quietude is not because I have benefited from you in anyway neither is it because I hope to curry favours from you. If you know me well which I believe you should, you will agree that I do not have much regards for politicians whose words are not their bond.

My refusal to come out publicly to chastise you on occasions you have erred is very personal. Sometime ago, you reportedly went and knelt before Mrs Ekaette Unoma Akpabio, an ordinary unconstitutional being and an arrogant usurper of power, begging for forgiveness for standing up to the wickedness and tyranny of Governor Godswill Akpabio. That was a very shameful and disgusting thing to do in your quest for power. Men of principles do not capitulate even at the risk of personal privations.

Since you are not representing me in the State House of Assembly, I care very little about how you go about your legislative responsibilities. You always want to be portrayed as a “progressive”. And that is the fulcrum of my commentary here.

Please in your quest to become the Speaker of the useless body called Akwa Ibom State House of Assembly, do not make reckless or provocative comments that insults the collective sanity of our people. Do not rape common sense just to massage the insatiable ego of your benefactor.

I have read comments credited to you that the elections in Akwa Ibom State was free, fair and credible. If indeed you made those statements, then it is very unfortunate. As corrupt and shameless as politicians in Akwa Ibom State are, I still believe that you have the potential to offer saner leadership. But I’m afraid that the once respected Onofiok Luke is fast becoming a terrifying sycophant.

You and I know what transpired in your local government area, Nsit Ubium on April 11 during the sham governorship and House of Assembly elections. So it is pointless to go through it here. Can you honestly knell before the Church of God or even before your pastor the way you knelt before Unoma Akpabio and swear with the Bible that your reelection on April 11 was not achieved through rigging, violence and fraud?

Can you also swear that the gubernatorial candidate of the Peoples Democratic Party (PDP) in Akwa Ibom State, Mr Udom Emmanuel “won” in a free and fair manner in your local government area? Playing God has destroyed many people. You don’t have to murder truth and good conscience in your aspiration to become the Speaker of the State House of Assembly. Life is more than uncensored loyalty to a corrupt dictator.

Your destiny is not in the hands of Godswill Akpabio. You have been privileged to be the President of the Student Union Government, University of Uyo, Speaker Nigerian Youth Parliament and member of the Akwa Ibom State House of Assembly. You are happily married with kids. So stop boasting, be sober and grateful to God.

You see, Godswill Akpabio may be you little god today but he is not and will never be God. Don’t allow your political interest to destroy the appreciable reputation that you have earned since your days as a student unionist. Becoming the Speaker of a State House of Assembly doesn’t make anyone more mortal especially when the House of Assembly is as irresponsible, corrupt and dependent as the Akwa Ibom State House of Assembly.

Effective representation is beyond carrying out caricature media welfarism for sheer political propaganda; it is beyond farming, dancing and eating with old, young and illiterate constituents and sharing the photos on social media for political gains. It is beyond stomach infrastructure.

I am devoting my precious time to offer this unsolicited counsel because I still admire you. I still regard you as a comrade brother. But you know that true comrades do not sacrifice core values on the alter of friendship and personal aggrandisement.

Dear Onofiok, Godswill Akpabio is a drowning man. His days of power, corruption, arrogance, dictatorship and shenanigans are numbered. Soon, his predicament will be worse than that of James Ibori, the convicted former governor of Delta State who like Akpabio, looted his State blind, oppressed his people and exercised absolute powers while in office. You have a choice – either to go down with him or stand on the side of the suffering masses of Akwa Ibom State.

I wish you what you wish our dear State and people.