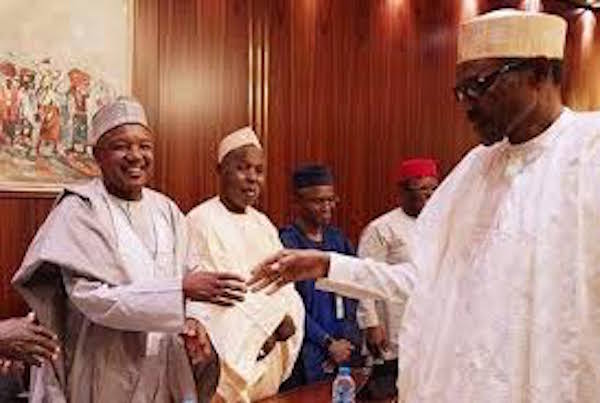 While he enjoys immunity from prosecution and unfettered access to taxpayers’ fund as the executive governor of Kebbi State, the United States and Jersey authorities have repatriated N112.05 billion ($308 million) stolen and laundered by Abubakar Bagudu on behalf of the infamous military dictator, Sani Abacha.

Before he became governor, Mr Bagudu, was a prolific bagman for Mr Abacha helping the kleptomaniac tyrant who died in 1998 to launder a large chunk of the estimated $2.2 billion stolen from Nigeria’s coffers.

The amount was described as the “largest single asset repatriation the Island (Jersey) has undertaken, and among the largest in the world,” in a joint press statement on Monday by the Nigerian government, US Department of Justice, and the government of Jersey.

Yesterday’s repatriation is the latest in a series of other funds stolen by Mr Abacha and his family, repatriated from Europe and the United States, which the Nigerian media now describes as the Abacha loot.

The amount to be repatriated to Nigeria following a tripartite agreement on Monday does not include the more than N59.3 billion ($163 million) Mr Bagudu agreed to return to Nigeria in 2003 in exchange for Jersey’s withdrawal of an extradition request to the United States for him to face criminal prosecution in the island nation.

Last September, PREMIUM TIMES had obtained a January 2019 ruling of the US District Court of Columbia in a suit between Ibrahim, Mr Bagudu’s elder brother, who was laying claim to $287 million deposited in one account owned by Doraville Properties, a shell company set up by Mr Bagudu to primarily launder funds stolen from Nigeria.

This newspaper revealed that Mr Bagudu spent six months in federal detention in Texas while awaiting extradition to Jersey. However, before he was handed over to criminal trial in Jersey, he quickly agreed to return $163 million to Nigeria and was released on bond to Nigeria where he was meant to be prosecuted for money laundering. However, on returning to Nigeria, he was neither questioned. He was instead cleared to contest in three different election cycles – one as a senator and two as governor – all of which he won.

The tripartite statement revealed details of how the funds were stolen and laundered through the United States banking system before being held in bank accounts in the name of Doraville Properties in Jersey.

According to the statement, Doraville was registered in British Virgin Island, a notorious tax haven, in the name of the elder son of Mr Abacha, Mohammed.

“In 2014 a U.S. Federal Court in Washington DC forfeited the money as property involved in the illicit laundering of the proceeds of corruption arising in Nigeria during the period from 1993 to 1998 when General Abacha was Head of State,” the statement revealed.

“This case is a result of extensive co-operation between the Jersey authorities, the Money Laundering and Asset Recovery Section of the United States Department of Justice and the Federal Bureau of Investigation, and the Federal Republic of Nigeria, with crucial assistance from other governments around the world.

“At the time the case was filed as part of the U.S. Department of Justice’s Kleptocracy Asset Recovery Initiative in 2013, it was the largest U.S. kleptocracy forfeiture action ever commenced. In 2014 the Attorney General of Jersey applied for and was granted, a Property Restraint Order over the Jersey bank account balance of Doraville.

“This was challenged in the Royal Court of Jersey and Court of Appeal, and an application for permission to appeal to the Privy Council by Doraville was refused. France and the United Kingdom restrained additional funds at U.S. request,” it added.

The statement also revealed that negotiation to return the stolen funds started in 2018. It was agreed that the funds would be used for projects administered by the Sovereign Investment Authority of Nigeria and would be independently audited. The Nigerian government was also required to set up a Monitoring team to oversee the implementation of the projects and to provide regular progress reports.

“The Nigerian government, in consultation with the other Parties, will also engage Civil Society Organisations, who have expertise in substantial infrastructure projects, civil engineering, anti-corruption compliance, anti-human trafficking compliance, and procurement to provide additional monitoring and oversight,” the statement explained.

“This Agreement represents the culmination of two decades of intensive work by Law Officers in Jersey, the United States and Nigeria. The return of the assets to Nigeria had been delayed by a number of hard-fought challenges by third parties which were defeated in the Courts in Jersey and the United States, said Mark Temple, The Solicitor General and Attorney General designate of Jersey.

“The Agreement establishes a framework based on fruitful co-operation, trust and respect so that the forfeited funds can be repatriated to benefit the people of Nigeria, from whom they had been taken. The use of the funds will be subject to monitoring and reporting obligations.

“This is a very significant achievement, and, once again, demonstrates Jersey’s commitment to tackling international financial crime and money laundering,” he added.

Abubakar Malami, the Attorney General of the Federation (AGF) and Minister of Justice, Nigeria who signed on behalf of the Nigerian government noted that this agreement has “culminated in a major victory, for Nigeria and other African countries as it recognizes that crime does not pay and that it is important for the international community to seek for ways to support sustainable development through the recovery and repatriation of stolen assets.

According to the statement, another $18 million could be repatriated to Nigeria after a pending resolution of Jersey’s Royal Court.

The amount is being withheld after a claim on it was made by an unnamed third party, believed to be Ibrahim, Mr Bagudu’s elder brother who court documents revealed is the only party still challenging the repatriation of some of the funds.

Meanwhile, Jersey and the United States will keep $5 million each to cover the costs and expense in the recovery of assets.

According to the agreement, the repatriated funds would be spent on the Lagos – Ibadan Expressway, Abuja – Kano Road and the Second Niger Bridge.