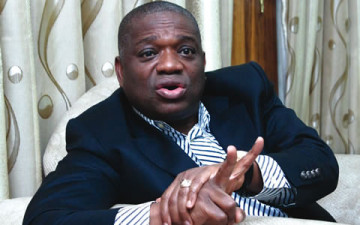 How can the federal government come to the rescue of workers in Abia state? Especially the teachers. Since the time of Orji Uzor Kalu, the former governor aspiring to become the FIFA President… but he will fail, there are certain payments and entitlements of workers, especially teachers that they have not gotten up till today! He left his successor T.A. Orji and Orji continued instead of correcting it! He too left and put another person who will continue where he stopped and coverup their mess.

Up till today, teachers/workers are being robbed by the state governor of their entitlements; no gratuity, pension is anytime they like, minimum wage is not in full, and many allowances… everything is being sliced down and they end up receiving peanuts.

They enrich themselves with people sweat, people’s labour, people’s sufferings.

I want the issue of Abia state go treated by Mr President. How do we go about it my chairman… Justice for the people is what we want.

Message sent to ENDS from Kingsley in Abia.