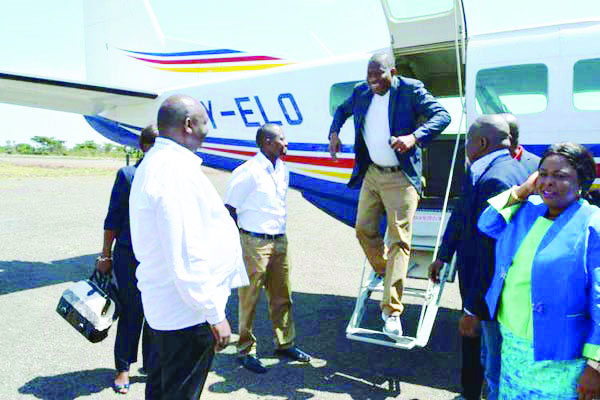 One of the planes carried Kenya State security and the second was occupied by Jonathan, his wife Patience and two of their children.

He is at the reserve for a three-day tour to witness the wildebeast migration.

Jonathan was booked at the new Angama Mara Lodge at the Oloololo conservancy.

The ex-president was received by Narok Governor Samuel Tunai.

Tunai, who is also the Council of Governors tourism committee chairman, said more than 500,000 tourists from all over the world are expected to witness the spectacular crossing of wildebeest across the crocodile-infested Mara River.

Jonathan, who refused to speak with reporters on his arrival to the reserve, according to Kenya media, is the second dignitary to visit the reserve in less than a fortnight after the King of Swasiland, Mswati III. The king was booked in the same lodge six days ago.

The owner of the hotel, Nicky Fitzgerald, said this tourism peak season is different from the past as prominent personalities from across the world have been calling for bookings.

“We have received Mr Jonathan, King Mswati III, a Chinese prominent family and we are expecting other royalties,” said Ms Fitzgerald.

The trooping in of world leaders to Kenya is expected to boost the tourism sector, which is recovering from travel advisories.

Britain has withdrawn travel advisories against Kenya and America is expected to follow suit. “Starting of direct flights between Kenya and the U.S. as Obama promised would really promote trade and tourism,” said Ms Fitzgerald.