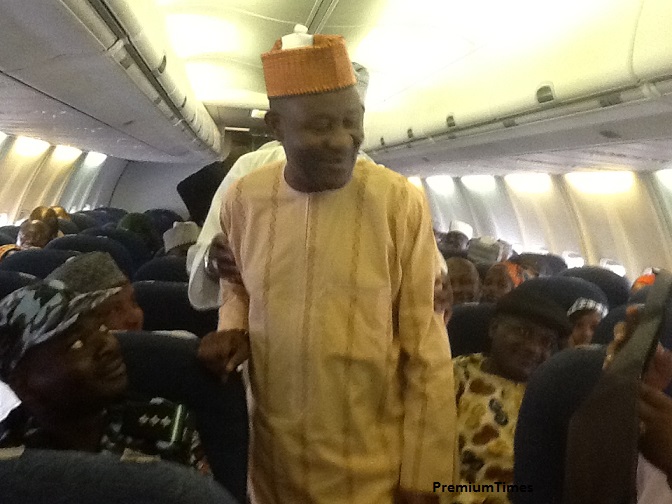 The Adamawa State Governor, Bala Ngilari, who is stranded alongside over 150 other Arik Air passengers, has rejected a special traveling arrangement made for him by his aides, offering to wait through the flight ordeals with other passengers.

Mr. Ngilari’s aides were able to get at least six seats for the governor and his security details and protocol officials on an Aero flight that departed the Kano airport about an hour after the troubled Arik flight arrived.

“He asked us to give one of the seats to one of the stranded passengers on wheelchair,” Mr. Garbajo said. “But the passenger also refused to leave, saying she would wait with other passengers.

“The governor is insisting that it would be inappropriate for him to travel with fellow citizens from Adamawa only to abandon them midway in Kano because the flight is troubled.”

Mr. Ngilari had during the troubled Arik flight moved round the cabin, greeting and shaking hands with all passengers aboard the plane.

About four hours after it grounded its faulty plane in Kano, Arik is yet to arrive with an alternative aircraft to airlift the stranded passengers.

The airline had promised that another plane, sent from Lagos, would arrive Kano at 9:45 p.m. But one hour later, that has not happened.

Read our earlier story on the stranded passengers below.

About 200 passengers on Arik Air’s 3:15 p.m flight from Yola to Abuja are currently stranded in Kano after their flight was diverted to Kano and then grounded after the pilot announced a mechanical fault.

On board the flight is the new governor of Adamawa state, Bala Ngilari, and other officials of the Adamawa state government.

Flight W3 409 was scheduled for 3:15 p.m but as usual with Arik, the flight was delayed for at least an hour.

The plane then flew for close to 40 minutes. But when passengers thought they were nearing the end of their journey, a member of the cabin crew announced that it was raining in Abuja and that it would be difficult for the plane to land.

The flight was then diverted to Kano. Shortly afterwards, the airline’s officials announced the plane was refueling and would soon continue its journey.

But minutes later, the pilot announced that the plane had developed mechanical fault and would not be able to fly. He said he had contacted his company’s headquarters to send another plane to take the passengers to Abuja.

As at the time of this report at 8:30 p.m., passengers are spread on the tarmac, discussing their ordeals in small groups.