Olufamous-I hope President Goodluck Jonathan and Ngozi Okonjo-Iweala who are deceiving Nigerians with re-basing of the economy can now see that their deceit is not working? No jobs anywhere for graduate youths:

An unemployed engineering graduate, Mr. Sunday Omotayo, tried to end his own life on Wednesday but for the timely intervention of a police woman along Wellington Bassey Way, Uyo, Akwa Ibom. Sunday Omotayo caused a stir in the area, when he jumped out of a speeding Toyota Hiace bus, expecting to be crushed to death by any vehicle. He is tired of life after searching for a job for 10yrs after graduation.

Speaking on his predicament, Sunday Omotayo said: “There is no state that I have not gone to in search of a job in the past 10 years. I came to Akwa Ibom because of the stories of Governor Godswill Akpabio and his publicized uncommon transformation.

“I came with the hope that with what is going on in the state, getting a job would be easy so that I can begin to be a man. But since I came, I discovered that many people from Akwa Ibom are also crying because of poverty and joblessness.” 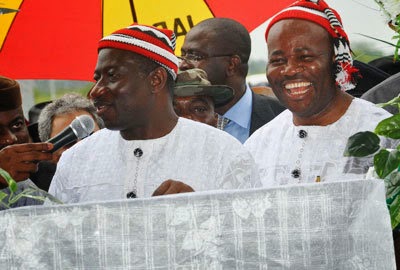 Some policemen, who were on patrol at the time of the incident, told Punchh that the frustrated graduate had in the morning gone to the state prison asking the officials to kill him or open the prison for him to enter.

A prison officer also confirmed that they saw him – well dressed and wearing a tie – running towards them. And added that his action forced them to become alert with their guns.

He said, “The next thing he said was ‘shoot me, shoot me, I want to die, I am tired of this world’. He added that otherwise, we should allow him to enter and die inside the prison.”

The official stated that Omotayo was later overpowered by the police, who counseled him and forced him into a bus heading towards the Ibom Plaza roundabout.

An eyewitness, Effiong Bassey, said Omotayo jumped from the bus into the major road for other vehicles to run over him. Lying on the main road leading to the Government House, It took a while for policemen to get him out of the road. He insisted he must put an end to his poverty-stricken life in a rich country like Nigeria.

This guy was trained as an Engineer, never exposed to entrepreneurial training in school. Sorry, Nigerians!