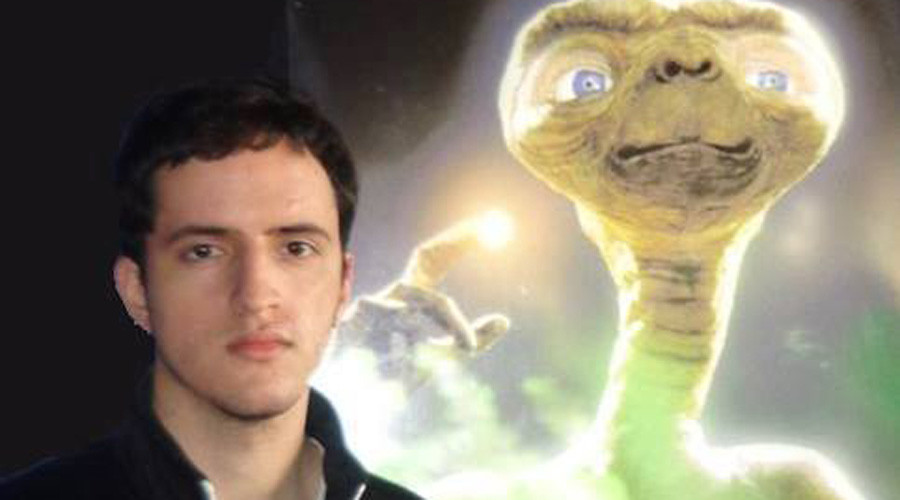 image © Bruno Borges / Facebook
The unexplained disappearance of a Brazilian man has sparked a rush of conspiracy theories after it was discovered he left behind a room full of strange writings and a statue of a 16th century philosopher who is famous for his theories about space.

Bruno Borges has been missing since Monday March 27 when he mysteriously disappeared after a family dinner in the city of Rio Branco in northwest Brazil.

The psychology student’s disappearance sparked international interest after extraordinary footage, which is reportedly from the inside of Borges’ bedroom, was posted online.

The video shows the room’s walls and floor lined with hundreds of thousands of words of text as well as strange diagrams. There’s also a bookshelf full of books and 14 large notebooks full of writings with large roman numerals stamped on the covers.

@SecureTeam10 Bizarre story in Brazil about Bruno Borges, a student ‘influenced’ by aliens to write a series of enigmatic books, who is now missing.

Perhaps the most bizarre feature in the room is the large statue of Italian Renaissance philosopher Giordano Bruno. Bruno is known for his theories on the infinity of the universe.

The former friar championed the Copernican system of astronomy which placed the sun, not the Earth, at the centre of the solar system, leading him to be charged with heresy and burned at the stake in 1600.

Among the writings were passages from the Bible and phrases from Leonardo da Vinci as well as what look like pentagrams. One of the books is titled “Theory of the absorption of knowledge.” There is also an odd self portrait of Bruno standing with an extraterrestrial.

The student’s disappearance was first noticed when his father entered his room, which was always locked, and saw what his son had created. “I went in there and did not see the bed, I did not see anything, I just saw it all. At that moment I saw that Bruno was gone,” the businessman told Globo.

According to his mother, Borges started his work in 2013 and began working on it intensely in the past year. “He just told me that he was writing 14 books that would change mankind in a good way,” she said. She told Globo that she believes the case is not just a standard missing person incident.

The curious case has captured public attention across the globe with people setting up Facebook pages dedicated to Borges and even sparking a Twitter moment as people try to decipher his works.

The investigator leading the case, Fabrizzio Sobreira, said the case remains confidential, but all possibilities are being considered.

Here is some text from Bruno’s writings

Superstitious beliefs abounded among Bruno’s fellow-
countrymen ; many of them clung to him through life,
were moulded by him into a place in his philosophy,
and bore fruit in his later teaching and practice of
natural magic. Thus we are told how the spirits of the
earth when the air is pure and calm, become visible to the eye. He himself
had seen them on Beech Hill, and on Laurel Hill, and
they frequently appeared to the inhabitants of these
places, sometimes playing tricks upon them, stealing
and hiding their cattle, but afterwards returning the
property to their stalls.

It was at Nola that Bruno saw what seemed a ball or beam of
fire, but was “really” one of the living beings that
inhabit the ethereal space ; ” as it came moving swiftly
in a straight line, it almost touched the roofs of the houses and would have struck the face of Mount Cicala, tounderstand the mind of Bruno, it is necessary toremember the atmosphere of superstition in which he lived as a child.

It was his exoteric philosophy with
which he could carefully drape his philosophy of religion
hostile to the Church, and ride as a hobby horse in his
unfruitful humours.

Even the heroic soul, however, is, as other souls. Soul and on the border line between corporeal and incorporeal nature ; in part it tends to rise towards the upper world, in part inclines towards the lower world. If sense ascends to imagination, imagination to reason, reason to intellect, intellect to mind, then the soul is wholly converted into God, and its dwelling-place is the intelligible world. In the contrary direction descends through conversion to the sensible world, byway of Intellect, reason. Imagination, sense, and the vegetative faculty. Mind, (the highest faculty in Bruno’s psychology :—the intuitive perception of unity with the supreme ideal world) is oppressed by its conjunc-tion with the more material faculties of the soul; knowing of a higher state to which the soul might rise, it despises the present In favour of the future. If a brute had sense of the difference between its condition and that of man, and between the baseness of its state and the nobility of that of man, to which it did not feel it impossible to rise, it would prefer death which should put It on the way to that state, to life which held It fast in its present one. So the soul, compelled by its loftier thoughts, as if dead to the body, aspires upwards. Although living In the body, it ” vegetates ” there as dead—Is present in it so far as animation is concerned, but absent from it In its proper action.

Thus the heroic soul, although present in the body, is absent from it with the better part of itself, and unites itself in an indissoluble bond with divine things. It feels neither love nor hatred of mortal things, con-sidering itself too great to be the slave and servant of its body: the latter it regards simply as a prison-house within which Its liberty is closed in ; a snare that holds its wings entangled; a chain that binds its hands; fetters that hold its feet fast; a veil that bewilders Its vision. Yet it Is neither slave, nor captive, nor entangled, nor chained, nor held fast, bound nor blind, for the body cannot tyrannise over it further than itself allows. It has divinity, since the corporeal world and matter are subject to divinity and nature. So it may make itself strong against fortune, magnanimous against injustice, bold In face of poverty, disease, and persecution.* 

Hard way For thousands of years the human being has been trying to find answers to questions like ‘what is the meaning of life’? The philosophy which seems to have begun with Thales of Miletus in the middle of 700 BCE seems to find traces of unanswered questions. The deep search for absolute truth comes from philosophy, and when we talk about easy or difficult paths we are referring to this type of theorem. It is easy to accept what you have been taught since childhood and what is wrong. It is difficult, as an adult, to understand that you were wrongly taught what you suspected was correct since you were a child. In other words, if you fit into some of the stimuli of the environment, you determined a certain behavior, making it at the mercy of beliefs already provided and well established in dogmas and rituals, with a concentrated mass of people in it; Or allowing you to conform, accepting the concept of happiness and sense of life embedded in the media and society, then clearly you are part of the easy path to the quest for absolute truth. Perhaps it fits into the second option, that is, the one who suspected every set of beliefs that was rooted to him, then he has everything to be a researcher of truthfulness in the things around him, entering a more complicated path, in which a minority Ventures or faces bravely.