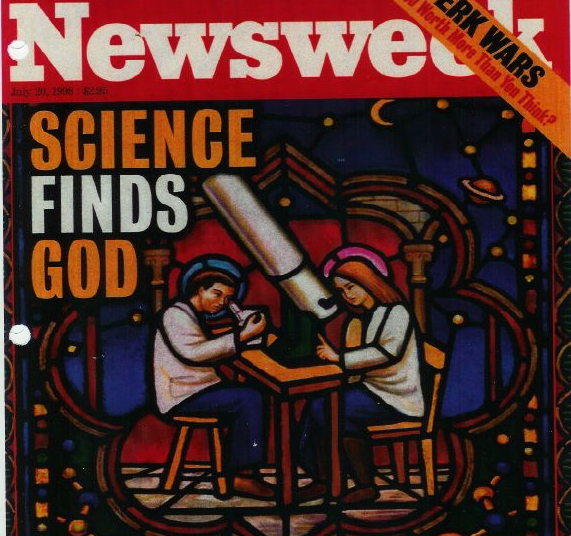 According to current scientific thinking, within the first just 500 million years of earth’s existence and in the most harsh environments, the almighty protocell magically beat the odds:

-It created and assembled genetic material.
-It arranged and maintained a membrane.
-It successfully divided and established and maintained replication ability and genetic transmission.
-It had a competitive nature.
-It ensured its offspring could oxygenate the planet.
-It defied the laws of entropy by evolving into higher complexity and producing greater and greater specialization and organization in its offspring as is the opposite of the natural trend from order to disorder.
-It established intelligence.

And most importantly, it did not die and become extinct.

Now those who propose an undirected evolution simply believe this was possible without a Supreme Supervisor. This raises the following questions:

-Why and how did the almighty protocell achieve this success so early in earth’s life span?
-For the 4 billion years after it came into being and the 500 million during its origins, why has no other cell or life form, achieved the feat that it did in just that short beginning period?
-Why is there no other successful protocell or proto-life (perhaps not cell-based), with its own unique “genetic” material or perhaps eternal life?
-Why has science today with its ability to perform billions of “nature” years worth of experiments and procedures, not been able to trigger a unique, other denovo protocell or create a life line, as intelligence devoid, “nature” successfully did?
-Why do we not find other new or perhaps eternal protocells or life forms abundantly in “nature?”

As much as the odds favor us achieving or discovering other life forms in the hundreds, against the gargantuan odds, we simply fail to.

We can understand the frustration that made renowned theoretical physicist and cosmologist Stephen Hawking subtly attempt to mislead his readers by claiming computer viruses are man’s creation of life, when it is well established that viruses in biology and technology are not life/alive. Quoting Hawking, “I think computer viruses should count as life. Maybe it says something about human nature, that the only form of life we have created so far is purely destructive. Talk about creating life in our own image. I shall return to electronic forms of life later on.”

It is important to note that “life” itself lacks a simple and universal definition in science. It currently is defined solely on the creative initiative of the almighty protocell. Is a stone alive as religions appear to suggest (Muslim Quran 2:74)? Perhaps they are alive and will eventually split, or is there a time limit to confirm reproduction, if life is defined by this criteria? It is interesting to note that if a moving, growing, responding, evolving, metabolising organism is found that does not reproduce, it will be said to not be living according to popular modern scientific reasoning. So also any eternal being if discovered…on Mars for instance…will be called inanimate. Movement, metabolism, reproduction and growth are performed by fires, yet they do not qualify as life in the all-or-not almighty protocell-based current definition of life. Perhaps science should investigate for life outside of the realm of the almighty protocell which limited life to a water-based, membrane encased, all-or-not list of criteria existence; investigating various other life forms including the un-encased and outside of the physical world. “Spirits” may be found. Perhaps we must first liberate ourselves from the almighty protocell and revise our definition of what life is.

Harvard’s Jack Szostak finds it hard to explain how the environment (chemical and physical forces) drove the almighty protocell in times of its limited biochemical functions. The error in this constricted line of thought is that by limiting our reasoning and experiments to the environment during which the protocell evolved/originated, we conveniently slant the argument to promote the “luck” of the almighty protocell, but in so doing severely limit scientific research into discovering or constructing other life forms by focusing research on the particular environment the almighty protocell magically succeeded in. Our current atmosphere can be more life originating for another (alien) life, can it not? Perhaps or strongly arguably we will find other “life” in the many extreme and not extreme environments on today’s earth and we will easily make many alternate/alien life forms in the lab with a variety of other experiments. To do this, we will need to know what we are searching for, or what not to limit ourselves in search of. But we appear to remain in reverence to the almighty protocell, presumed ancestor of all, yet deny Supreme determination in its origination and successful, sustained and directed evolution. It should logically be quite easier to make our own many “alien” proto-lives and fully non-conventional living beings than to invest so much on finding how the almighty protocell got it on.

Back to the protocell’s challenge. The probability-based theory that we are perhaps the lucky one of several billion inhabitable planets in our milky way and infinite “bubble multiverse theory” universes where life could have originated, fails to fly on the simple basis that: the other habitable planets and universes for all we know may all contain life. Therefore our one in a billion odds success may as well be a billion-in-a-billion, all habitable being habited. You cannot create an unknown and fictitious probability case to explain your assumed luck. The answers on examining the billions of galaxies and “tons of universes” may rather be consistent life thereby eliminating the we-were-the-lucky-chance gamble and promoting Guided evolution.

Therefore disbelievers are challenged to explain why, if brainless “nature” could create life within the first 500 million years, it cannot in the next 4 billion, and modern human intelligence-run scientific labs should not be able to make their own unique other DNA or non-DNA based life form in under an hour.

The above life origination/evolution challenge adds on a first related challenge which I call the #atheistChallenge as hash-tagged on Twitter, which similarly begs a disbeliever in the Supreme Being for his explanation to the “conservation law” and “inertia” defying existence and sudden expansion of the initial Singularity (big bang, and first bang if a big bounce) as posed directly to atheists in the Muslim Quran chapter 21:30. How comes the ball and who kicked it? It is two evolutions, that of the cosmos and that of life, that disbelievers in the Supreme God (Brahman/Allah/Elah/Elohim/Yahweh/Amadioha/Olorun) are challenged to answer.

These two challenges make it rather so easy to deny the Supreme Existence. After all God has said that He makes life (Bible: Isaiah 42:5; Quran 67:2). Make yours, prove you are a god. And this does not include altering the life God made, because according to the Books, Satan promised to help man to alter/engineer the life God made (Quran verse 4:119).

It can be imagined the almighty protocell is cracking up, rolling on its belly, pointing its finger at us and 4 billion years of “nature’s” failure to evolve a single competitor in spite of what may be considered a more life-initiating conducive environment. 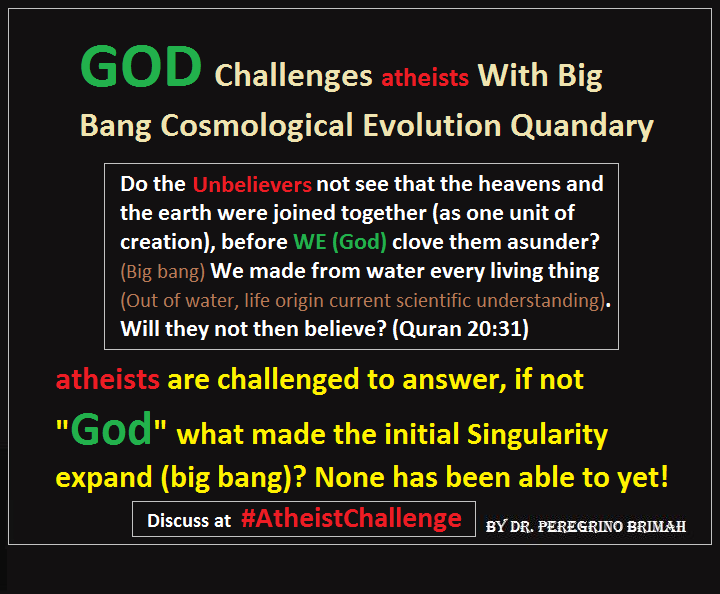 On a final note, it must be mentioned that the belief in evolution has been held and proposed by many in the religions and in Holy scripture, hundreds of years before Darwin. The contention point is in cosmological and life evolution/origination being either random or God-sired. Dashavatara‘s ten avatars of Vishnu present a picture of evolution as does the broad Hindu principle of reincarnation according to adherents. Muslim scientists like 9th century Muslim African-Arab al-Jahiz and 14th century African Ibn-Khaldun described God directed evolution of plants and animals and God supervised transformations in the struggle for survival in great detail. The only difference that may prompt debate, is that many faithful believe the modern Homo Sapiens was not among the many products of evolution from the almighty protocell. Modern science is yet to find a hominid species “transitional” link to “wise man,” Homo sapiens idaltu in this regard.

*Note, “nature” in this presentation, is kept in inverted commas, because “it” is a nonexistent “intelligent” character, conveniently created outside of religion; capitalized as existing (a noun) and typically addressed as a female, “mother nature,” purposely so as not-to-be-confused-with-God (typically: Father/He) by the faithful, to replace the brain’s innate dependence and utility of the God Supreme intelligence figure in comprehending and dealing with life.

It’s a discussion. I hope to hear from you.