The First Lady, Dame Patience Jonathan has been on the campaign trail for her husband’s re-election for some months now, making speeches in packed Stadiums and appearances at special campaign functions.

However, she stunned the entire political landscape yesterday when she was heard saying: “Am better First Lady than Obama wife now.

“Did she campaign for her husband like this when his own eleshun time come?” 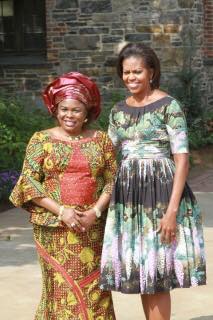 On further prodding, she further revealed: “Yes now. Am better Furs Lady than Michelle Obama. And by the grace of God I will become Furs Lady again when everybody vote for Umblera in the eleshun. Don’t answer anybody that is talking change. They are lying”.

APC stalwarts have condemned the statement by the First Lady, claiming it will damage diplomatic relations between Nigeria and the USA.