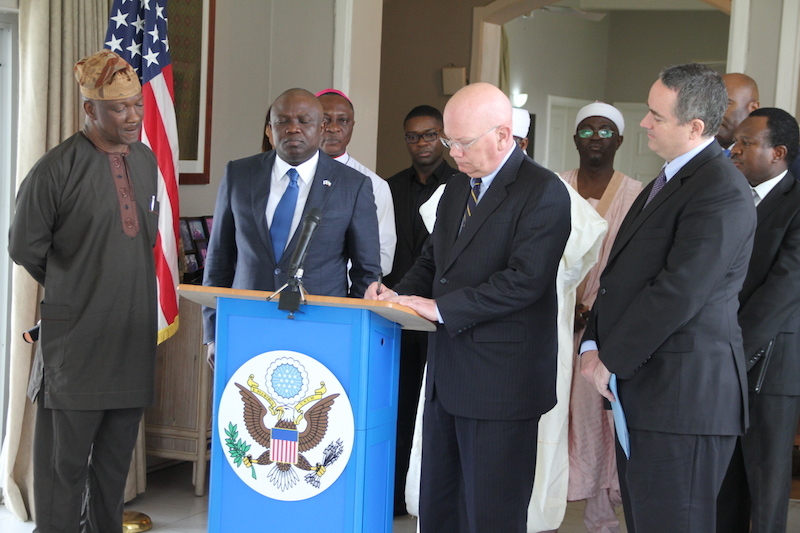 As part of ensuring a violence-free polls before, during and after the 2015 gubernatorial election in Lagos, the Public Affairs Section of the United States Consulate General yesterday facilitated a Peace Pledge ceremony with the two leading candidates- Akinwunmi Ambode of the All Progressives Congress (APC), and Jimi Agbaje of the Peoples Democratic Party (PDP).

Ambassador James Entwistle, the US Ambassador to Nigeria, in his address said that peace is non-negotiable hence, the call for electoral security roundtable with the two leading candidates.

His words: “We need to commit to peaceful elections. This is an opportunity we have to be greater as a nation. The faith community is also committed to ensuring peace.”

Ambode, in his speech stressed that his party and followers has always remain calm and committed to violence-free campaign.

“We will make sure all our supporters pledge to the peace we signed here. Nobody wants Lagos to burn; we have shown exemplary leadership and Lagosians will tow the same line” Ambode said.

Agbaje on the other hand noted that Lagos rise on good governance and thus pledged to do nothing to make Lagos burns. He however expressed his displeasure on how some unknown persons vandalize and deface his campaign materials but the way forward according to him must be a peaceful one.

“Even if you feel cheated, the solution is not violence but you follow due process,” Agbaje mentioned.

Archbishop Alfred Rewane Martins, Catholic Archbishop of Lagos, added that the faith community is also committed to ensuring peaceful elections and have at all times discourage whatever may lead to breach of peace.