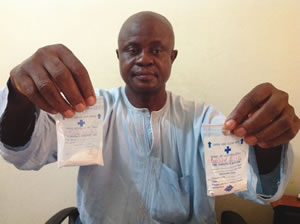 The Professor of Veterinary Medicine, who obtained his first degree in same discipline at the University of Nigeria Nsukka in 1986, Masters in Ruminant Medicine, and doctorate degree in Canine Medicine all in UNN, said he moved to MOUAU on leave of absence.

It would be the third confident claim by Nigerian professors; the most recent was by the microbiology chair of University of Benin, Professor Ibeh who discovered Dx-Liquid.

Speaking with Southern City News in his office, the Abia State-born don said his research into the therapy known as ‘Antivirt’ (Anti-Viral Therapy), dated back to 1994 when he took the challenge to be part of the global solution to the HIV/AIDS scourge ravaging humanity.

He said after 19 years of hard work, he was able to discover the therapy in 2013 when his research was eventually published in the British Journal of Medicine & Medical Research.

Ezeibe added that the work had also been published by the American-based medical journal known as The Health.

He said he decided to publish his research work on the therapy so as to prove anyone who would doubt that a black man could develop HIV/ AIDS cure, wrong.

He boasted that the experiment remained authentic and verifiable in any part of the world under same condition.

According to him, two essential minerals – aluminum silicate (kaolin) and magnesium silicate, used in producing the therapy, have large deposits in Umuahia and parts of Abia State.

This, he said, would make the therapy cheaper and more affordable than the current anti-retroviral therapy, adding that the therapy would take an average of two to three months to cure HIV/AIDS patient. Read full on Punch