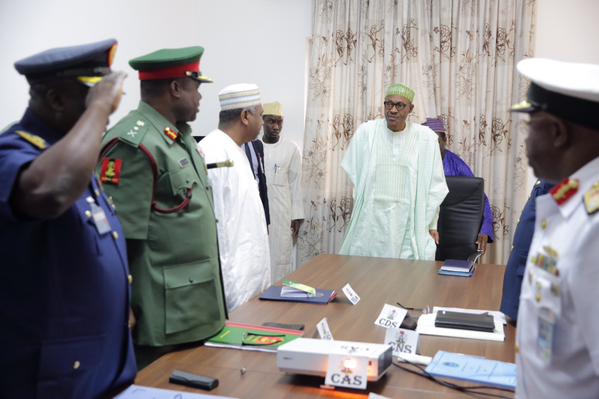 The Nigerian military has moved some of control command to the northeast Maiduguri, the capital of Borno State the heartland of Boko Haram’s insurgency, the army said. However there is no evidence that the Army chiefs, CDS Alex Sabundu Badeh and COAS Kenneth Mnimah are planning to relocate along as they are so far hiding away in Abuja, supposedly to move at a later date.

According to the below release by the Nigerian army, an unnamed Two-star general is leading the command team that has relocated.

Acting Director Army Public Relations, Colonel Sani Usman, said the movement of the military control command for counter-insurgency operations in the nation’s northeast states was in compliance to the order of Nigerian President Muhammadu Buhari during his inauguration on May 29.

“In compliance with the presidential pronouncement and the Chief of Army Staff’s directive, a reconnaissance and advance team for the establishment of Military Command and Control Centre (MCCC) for OPERATION ZAMAN LAFIYA for the fight against terrorism and insurgency has moved to Maiduguri, Borno State,” Col. Usman told newsmen in Maiduguri on Monday.

He said the team, led by “a Two-Star General,” has already commenced work in earnest. It is comprised of elements of the Office of the Chief of Army Staff, all the relevant Army Headquarters Departments, and other combat support components.

“The Centre will serve as a forward command base for the Chief of Army Staff and other service Chiefs. The Centre is essentially an elaboration of an already existing Army Headquarters and Control arrangement. From now on, the fight against terrorism and insurgency would be monitored, coordinated, and controlled from this center,” he disclosed.

He assured the establishment of the control command at the epicenter of Boko Haram activities would not create “another layer of command structure” but would “add impetus and renewed vigor” to the operation against insurgency.

“An alternate command center is also being established in Yola,” he added. Yola is the capital of Adamawa State, one of the three northeast states affected by Boko Haram insurgency.