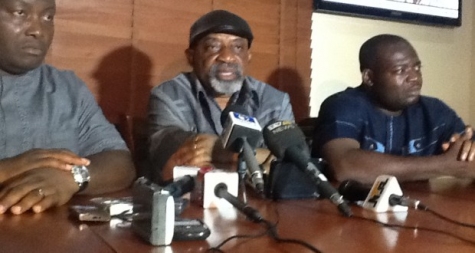 The Anambra State Governorship Election may have lost any iota of credibility as three of the four major political parties that participated in the election have called for the cancellation of the election.

Senator Chris Ngige (OON) of the All Progressives Congress (APC), Mr. Ifeanyi Ubah of the Labour Party (LP) and Mr. Tony Nwoye of the Peoples Democratic Party (PDP) have called for outright cancellation of the governorship election, saying it was marred with serious irregularities.

In an earlier world press conference, Senator Ngige complained that there were grave irregularities that marred many aspects of the election in at least four local councils considered by all as his strongholds, adding that there was a pre-determined plot to disenfranchise his supporters and ensure that he did not win the election.

Ngige pointed out that the manipulation that characterized the Maurice Iwu led INEC has resurfaced in Jega’s era.

Ubah in an interview with AIT said that while the election in the Nnewi area was free and fair, the poll was plagued by irregularities in most parts of the state. He accused Anambra State Governor Peter Obi and the All Progressives Grand Alliance (APGA) of massive corruption of the electoral process with state resources, saying the recently approved N36 billion supplementary budget was deployed to induce voters and electoral officials.

On his part, Nwoye who was visibly angry while speaking on AIT, described the election as the worst he had witnessed in his lifetime. Nwoye has every reason to be embittered; even as a candidate being voted for, he was unable to vote for himself. But he was only one of the many voters whose names were not in on the voters’ register. Also affected was PDP stalwart, Chief Arthur Eze.

Nwoye said the election was a pre-meditated plot to throw up the APGA candidate, Chief Willie Obiano, adding that the APGA leadership deployed the security agencies to protect riggers and closed their eyes to mindless inducement of voters.

There were strong indications of a systematic plot to disenfranchise voters sympathetic to Ngige, as election materials meant for areas where he has strong support base were not delivered or got to the polling stations late. In other areas, result sheets meant for polling units were deliberately mixed up or were not delivered at all. It took the personal intervention of Ngige and his team for materials to be delivered to his Alor town around 11 a.m.

INEC Chairman Prof. Attahiru Jega admitted that his staff compromised the process especially in Idemili North Local Government Area but declined to order re-run in the entire local council, leading APC, Labour and PDP among others to pull out of today’s rescheduled election in Obosi comprising 65 polling units.

In also calling for total cancellation of the election, APC’s Interim National Publicity Secretary, Alhaji Lai Mohammed, said the call supersedes the party’s early call for a rerun in four local government areas. The APC said INEC inexplicably used a voters’ register totally different from the one it gave to political parties ahead of the election, adding that the new register did not contain the names of most of the registered voters in the state.

His words: “After consultations with our agents as well as with local and foreign observers, we have discovered that what we earlier complained about was a child’s play, compared to the widespread disenfranchisement that was orchestrated by the same body given the responsibility of ensuring a free, fair and creditable election on Saturday.

“We discovered that INEC has set up a multi-layer arrangement to ensure that most voters in the state were disenfranchised, apparently acting out a script to manipulate the result of the election in favour of a certain candidate. Where voting materials were supplied, the commission provided wrong voters’ register.”

The APC said that “coming after the charade in Delta, this is a serious development that raises questions about the ability of INEC to conduct free, fair and transparent elections anywhere in Nigeria. It is particularly serious because if people who registered to vote are not able to do so, and even the votes of those who managed to cast them do not count, then anarchy is looming.”

The party called for a probe of INEC “to determine why it has taken it upon itself to sabotage its own elections, even when people are determined to endure the orchestrated inconveniences and shun all acts of violence, as was witnessed in Anambra on Saturday when people waited patiently and peacefully, only to go home in total disappointment.”

“This is a new low for INEC,” APC observed, warning that “unless something is done urgently, the electoral commission may plunge Nigeria into a crisis from which it may not recover,” APC warned.