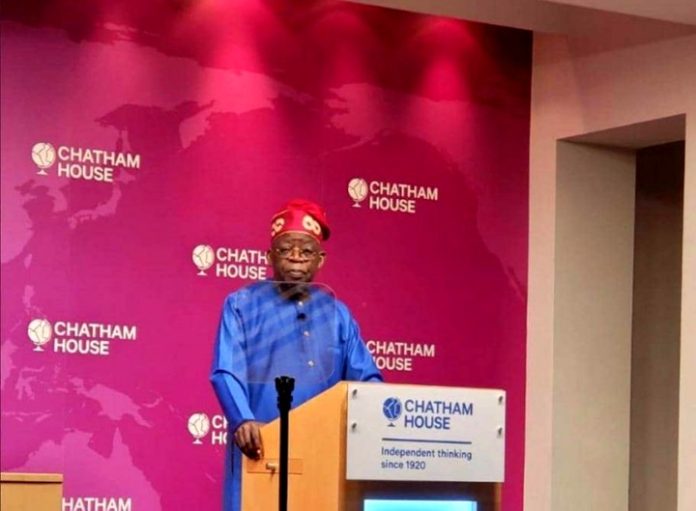 The Presidential Campaign Organization of the Atiku/Okowa Campaign has described the appearance of the All Progressives Congress Presidential Candidate, Asiwaju Ahmed Tinubu, at the Chatham House in London as disgraceful.

According to the PDP Campaign, Tinubu’s outing was a pitiful display of vacuity, as he failed to perform the most basic of tasks required of a person seeking to lead the world’s largest black nation.

Kola Ologbondiyan, the spokesperson for the Atiku-Okowa Presidential Campaign, stated this in Abuja on Monday.

“Nigerians, including supporters of the APC Presidential Candidate, were thoroughly embarrassed to watch Asiwaju Tinubu, who had earlier showboated with a scripted speech, go blank on the world stage in a tragic display of emptiness and inability to personally address questions on the economy, security, and other challenges confronting our nation,” he said.

“Our Campaign finds it extremely disturbing that a candidate aspiring to be President of a country as complex as Nigeria demonstrated an embarrassing inability to coordinate his own thought process to the extent that he could not personally think through issues and address them but had to direct questions put to him, including those on his health and policies, to others to answer.”

“Asiwaju Tinubu has confirmed to Nigerians and the world that he has no business contesting the 2023 Presidential election; that he is grossly incompetent, completely unprepared for leadership, and intends to delegate the onerous task of leading our nation to proxies and a cabal that did not seek votes from Nigerians,” Ologbondiyan added.

“Of course, Nigerians cannot afford to have a President who refuses to accept responsibility for leading and instead seeks scapegoats to blame for his inevitable failures.”

“Despite notes passed to him at the event by his handlers, the APC Presidential Candidate ended up becoming a butt of international joke because he could not provide any lead on the critical issues of economy, security, youth development, and foreign policies.”

The PDP campaign reminded Nigerians that it had previously warned Asiwaju Tinubu and his handlers not to embarrass our country by displaying his constant gaffes on the International Stage at Chatham House.

It then ordered Tinubu’s handlers to stop embarrassing him by always pressuring him to make public appearances, even when they are aware of his numerous flaws.

“What Nigerians expect is for the Tinubu/Shettima Presidential Campaign to apologize to the nation and stop embarrassing their principal with poorly scripted appearances,” Ologbondiyan said.

“Now that the APC Presidential Candidate, Asiwaju Tinubu, has confirmed his unpreparedness and lack of capacity on the global stage, we urge him to call off his campaign, stop wasting resources, go home, and rest.”

“In any case, Nigerians remain steadfast in their support for the PDP Presidential Candidate, Atiku Abubakar, who has demonstrated unparalleled capacity and readiness for leadership, as evidenced by his Arise TV Town Hall meeting.”

The PDP Campaign Spokesperson stated that Atiku personally took questions and professionally outlined his policy programs, which included realistic solutions to the challenges that the failed All Progressives Congress (APC) administration brought to our country.

This, among many other compelling reasons, he claims, makes the Atiku-Okowa PDP ticket the clear winner in 2023.