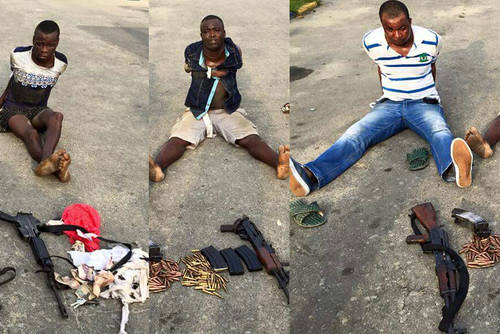 On November 19th 2015 three [3] members of a notorious armed robbery gang operating in Port Harcourt Metropolis with formidable weaponry headed by one George, a native of Rumukunde Community in Emohua LGA of Rivers State were arrested by men of the Special Anti-Robbery Squad [SARS] of the Rivers State Police Command.

Investigations by the Nigeria Police reportedly revealed that the suspects killed officers of the Police and Nigerian Army before carting away their arms in various operations in the past. For example, it was discovered that on 14/10/2015 the notorious gang allegedly robbed Diamond Bank, Port Harcourt among other daredevil operations across the State.

According to their investigations, the Police stated that other criminal activities carried out by the gang were the murder in cold blood of several police and military personnel including one Lance Corporal Yohanna Kamuji and Corporal Bello Lazarus both attached to 20 Battalion of the Nigeria Army, Bori Camp, Port Harcourt. Army eye witnesses confirmed the suspects to be behind the killing of their deceased colleagues.

The APC is shocked that right from the day the suspects were arrested and two of them charged to court there had been intense pressure by officials of the Rivers State Government to have them released as the suspects are alleged to be the boys of a serving Government House Chief of Staff.

With the Wike government on its way out, the governor’s Attorney-General through the Director of Public Prosecution [DPP] has finally advised against further prosecution of the dangerous criminals who were responsible for the killing of many innocent citizens including members of the Nigeria Police and Nigerian Army. This is contained in a legal advice by the Director of Public Prosecution [DPP] advising that the charges against the 3 gang members be dropped while their case files have been returned to the Police.

The Rivers State Chapter of All Progressives Congress, APC, wishes to re-iterate that this singular act by the Rivers State Government goes to confirm, beyond any shadow of doubt, that the officials of government of Barr. Nyesom Wike are behind the spate of killings, kidnapping, cultism, armed robbery and other crimes that have bedevilled Rivers State since May 29, 2015.

The APC would like to draw the attention of the Inspector-General of Police [IGP], the Chief of Army Staff [CoAS] and the D-G, DSS to take notice of the great injustice this act by Governor Nyesom Wike will mean to those service personnel who have paid the supreme price and the families and survivors they left behind. Overall, the dropping of charges on these criminals will only embolden more criminals to kill and maim innocent people and residents of Rivers State.