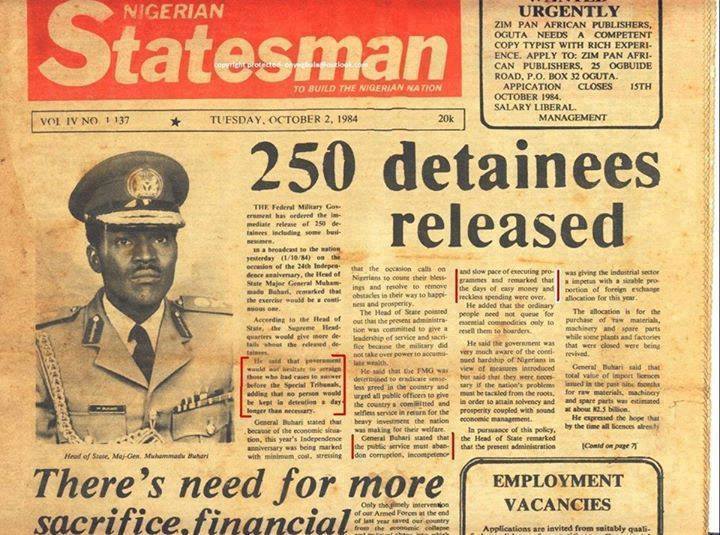 The Federal Military Government has ordered the immediate release of 250 detainees including some businessmen. In a broadcast to the nation yesterday (1/10/84) on the occasion of the 24th Independence Anniversary, the Head of State Major General Muhammadu Buhari remarked that the exercise would be a continuous one.

According to the Head of State, the Supreme Headquarters would give more details about the released detainees. He said that the government would not hesitate to arraign those who had cases to answer before the Special Tribunals, adding that no person would be kept in detention a day longer than necessary.

General Buhari stated that because of the economic situation, this year’s Independence was being marked with minimum cost, stressing that the occasion calls on Nigerians to count their blessings and resolve to remove obstacles in their way to happiness and prosperity.

The Head of State pointed out that the present administration was commuted to give a leadership of service and sacrifice because the military did not take over power to accumulate wealth.

He said that the FMG was determined to eradicate senseless greed in the country and urged all public officers to give the country a committed and selfless service in return for the heavy investment the nation was making for their welfare. General Buhari stated that the public service must abandon corruption, incompetence and slow pace executing programmes and remarked that the days of easy money and reckless spending were over.

He added that the ordinary people need not queue for essential commodities only to resell them to hoarders. He said the government was very much aware of the continued hardship of Nigerians in view of measures introduced but said that they were necessary if the nation’s problems must be tackled from the roots in order to attain a solvency and prosperity coupled with sound economic management.

In pursuance of this policy the Head of State remarked that the present administration was giving the industrial sector an impetus with a sizable proportion of foreign exchange allocation this year. the allocation is for the purchase of raw materials, machinery and spare parts, while some plants and factories that were closed were being revived.

General Buhari said that total value of import licenses issued in the past …. for raw materials, machinery and spare parts was about N2.5 billion. He expressed the hope that by the time the licenses already (Contd on page 7)

The Army Chief of Staff, Brig. Tunde Idiagbon, has signed orders for the detainees’ release, but it was not known whether they have been freed.