Following the recent announcement by the Nigerian Police Force NPF of the arrest of suspected kidnappers and killers of a Nigerian Army Colonel Inusa Samaila, The Islamic Movement in Nigeria IMN says it is finally absolved of the fabricated lies against it.

The Police Public Relations department made public the names of the suspected kidnappers in a statement signed by Olabisi Kolawale recently announcing that the long arm of the law has reached the criminals.

It would be recalled that intelligence sources linked with the Aso Rock have declared that the Colonel was kidnapped by members of the IMN to possibly use as hostage for the release of their leader who had been in detention for months without charges.

The IMN through its spokesperson Malam Ibrahim Musa was quick at dissociating itself from the crime in a statement issued to the press on the 8th of March 2016.

Part of the statement reads “Our attention has been drawn to a false, unsubstantiated and mischievous claim, that looks more like a planned operation aimed at painting the Islamic Movement in Nigeria (IMN) black, of some “intelligence” report that the IMN may plan kidnap of military officers for ransom for the release of our revered leader, His Eminence Sheikh Ibraheem Zakzaky.

“Typically, this was followed by the alleged kidnap of an Army officer in Kaduna with the Nigerian Army issuing statement calling on the public to give information that would lead to the arrest of the perpetrators. Soon, some media outlets were quick to quote these malicious sources linking the IMN with the alleged kidnap.”

The statement further said “We wish to categorically state here that the Islamic Movement in Nigeria under the leadership of His Eminence, Sheikh Ibraheem Zakzaky has never, is not and will never engage in any form of crime to meet any of its objectives. Crime and criminal activities are fundamentally sinful and are not in our character.”

The Nigerian Police has finally nailed the perpetrator of the kidnaping as Ibrahim Mu’azam Kabiru (Ustaz), 23, Ebele Precious (Fasto), 41, Emeka Okeke Cyprian, 44 and Chijioke Ugwuanyi who were traced through one Abdullahi Adamu that was using the TECHNO cellphone of the late Colonel.

AK47 rifle, two pistols and a Nissan Jeep were recovered from the gang together with documents of six landed properties in Anambra State from the farm of the mother of one of the suspects.

It is said that one of the suspects, Ibrahim Kabiru is the grandson of a scholar of a particular religious sect in the country not disclosed. 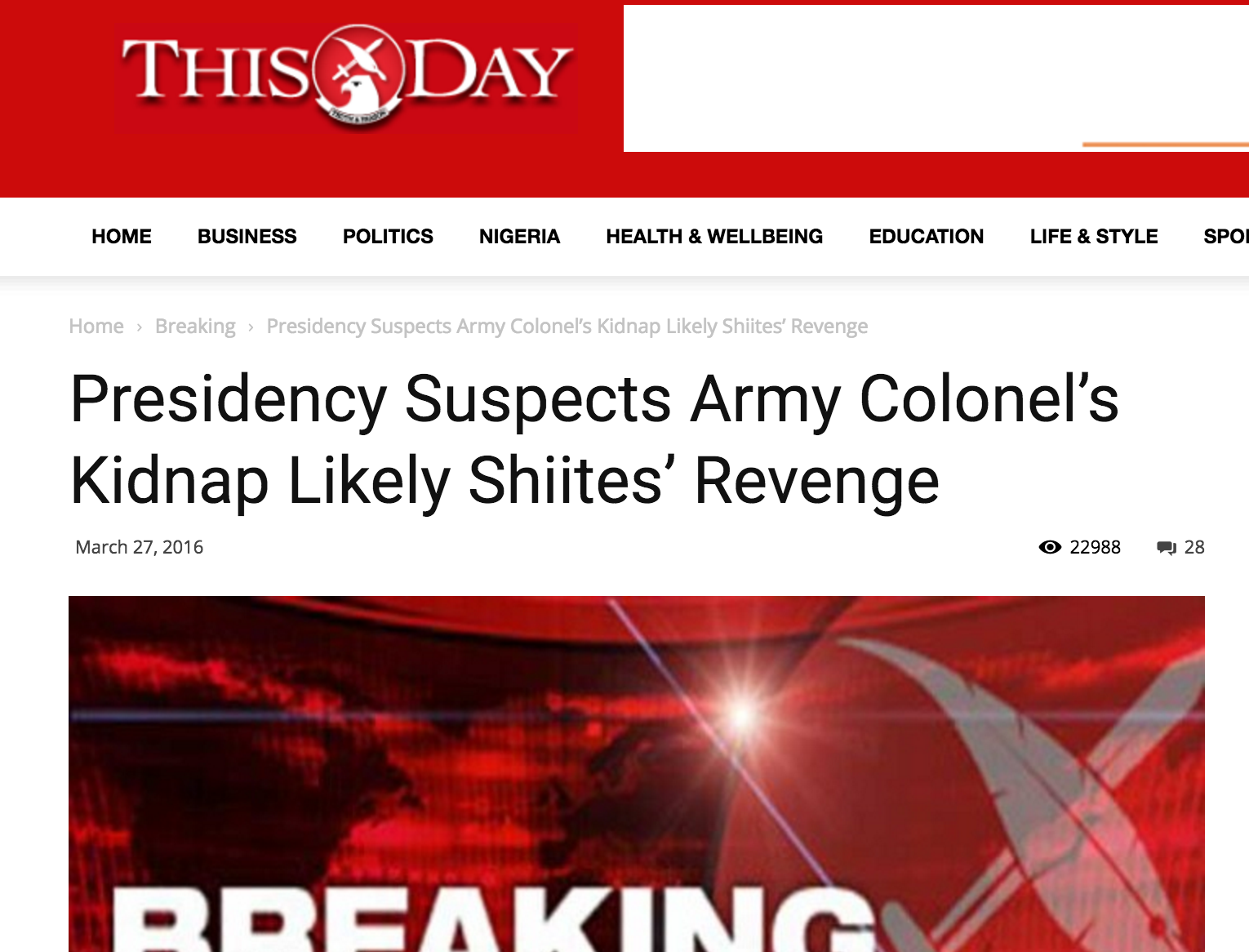 Following the earlier claim by the intelligence sources that the IMN was involved in the kidnap, the spokesperson of the IMN said in a telephone conversation that it is very dangerous now that the Nigerian intelligence seem to have been compromised and is being used to blackmail groups and individuals for selfish interests.

He said that the same fake intelligence reports might have led the Army to launching an attack on the IMN on the 12th to 14th of December 2014 that led to the extra-judicial killing of over 1000 followers of Sheikh Ibraheem Zakzaky.

Musa also recalled that the General Officer Commanding the 1 division of the Army Kaduna, Maj. Gen. Adeniyi Oyebade told the Judicial Commission of Inquiry, JCI set up by the Kaduna state government that they received intelligence reports that members of the IMN were gathering to destabilize Zaria.

Following this report he ordered a said ‘cordon and search operation’ that led to the worse extra-judicial killings ever in recent times in which youth, women and children were victims.

The spokesperson described the situation as a very dangerous one where fake intelligence reports are concocted to serve some personal whims against the general interest of the country.

He finally called on the general public to dismiss similar fabricated intelligence reports circulated recently in army formations that IMN members are after kidnapping senior officers to use in negotiating the release of their leader who has been in illegal detention for over five months.