NewsRescue- News from Ghana about two individuals arrested when 65 pump-action guns were discovered in a hidden compartment in a Nigerian licensed and bound truck at the Aflao border, Ghana is depressing. According to the Ghana News Agency:

The driver and mate of the truck carrying several boxes of ammunition which were impounded at the Aflao border on Friday have escaped from custody after their brief detention.

Both men are believed to be Nigerians who were trying to illegally smuggle the guns into the country.

A joint Police and CEPS team impounded the truck after a thorough search of the vehicle led to the retrieval of more than 50 guns.

The Aflao Sector Commander of the Customs Excise and Preventive Service, Seth Dovlo, in an interview with XYZ News said investigations have intensified to re-arrest the Nigerians.

He said a search has also been mounted for the owner of the truck.

This is the second time Nigerians have been arrested in the country for importing guns and ammunitions this year.

In January, the Greater Accra Regional Police Command impounded a Nigeria-bound truck also loaded with a cache of arms and several boxes of ammunition. -source

This is very disturbing news as higher authorities have always been implicated in the spate of terror in Nigeria. Such a high level call for release of gun and terror funding terrorists on a multinational scale is not only embarrassing of deadly proportion, but it brings into question the level of authorities both in Africa and perhaps overseas involved in creating chaos in Nigeria.

A Nigerian registered articulated truck, with 65 pieces of pump action guns has been intercepted by the Customs officials at the Aflao border.

The vehicle with registration number XV163-FST was said to have arrived at the border on Thursday, May 17, this year, at about 1900 hours, on its way to Accra, with no cargo on board.

Customs Officers at the last checkpoint who were said to suspicious ordered the driver to park at the vehicle park for examination the following morning, Friday.

Their suspicion heightened when early Friday morning the driver and his “mate”, whose identity was not known, could not be traced for the inspection to proceed.

At about 1600 hours, however, the officers commenced the inspection without the driver and the “mate” and the weapons were found embedded in a false apartment on the floor of the vehicle.

Some bundles of US dollars and Naira were also found in the compartment.

CEPS officials, joined by Bureau of National Investigation (BNI) operatives and officers of the National Security were unwilling to divulge further information to the Ghana news Agency. -Source: GNA

NewsRescue- It will be recalled that just this January a gang of five was caught in Ghana also trying to smuggle guns into Nigeria. The five comprised of three Ghanaians and two Nigerians. They were apprehended in Achimota, a suburb of the capital Accra after a tipoff from an informant who noticed them offloading the suspicious cargo into a home.

Arms and ammunitions being smuggled at the time included hordes of AAA cartridges, 10 pump-action guns and 20 double barreled guns. 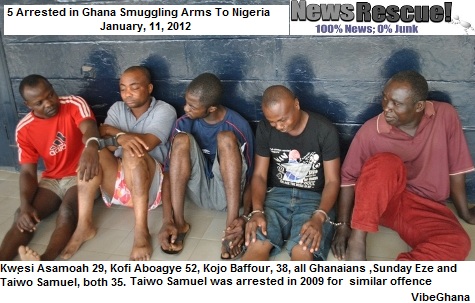