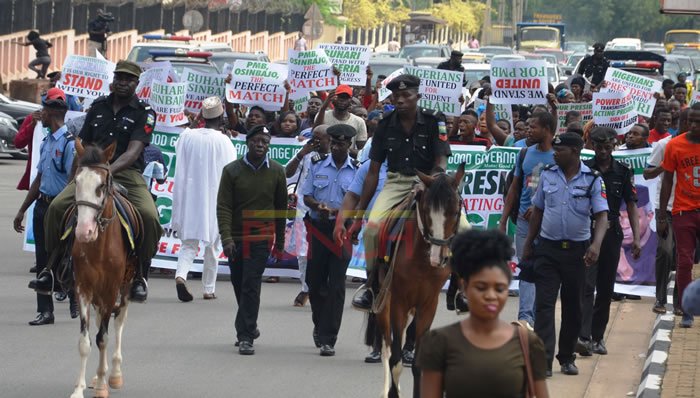 Civil society activists who have been staging protests demanding the immediate return or resignation of ailing President Muhammadu Buhari have accused officials at the Presidency of recruiting thugs to attack their members.

In a statement released today and co-signed by Charles Oputa (Charly Boy), leader of the #ResumeOrResign movement, and Deji Adeyanju (the movement’s co-convener), the protesters disclosed that a group this morning “attempted to attack participants of our peaceful #ResumeOrResign sit out as we were concluding activities for the day.”

Describing the attempted attack as totally unprovoked, the statement said the intention was to intimidate participants in the protests to discontinue their participation. They said the attack was foiled by the intervention of security agencies.

“This attack came shortly after we had been informed by officers that policemen would be unavailable to prevent a breakdown of law and order on Saturday, August 12, 2017 because of other engagements,” said the movement’s leaders. They added: “We are reliably informed that these thugs are sponsored by the Federal Government and members of the cabal that seeks to prevent us from asking for full disclosure of the health status of President Muhammadu Buhari.”

The leaders of the protests stated that they had been reliably informed “that the intention behind this attack and the plan to withdraw the police from Unity Fountain is to leave our group open to attacks. These further attacks will then be used as a foundation to issue a blanket ban on peaceful gatherings such as ours under the guise of preventing further breakdown of law and order.”

The group blamed “the antics” on a coalition that included Mr. Buhari’s aides, a cabal in the country and the security agencies, arguing that the three groups were “playing the same script.”

The statement noted: “Our group remains committed to a peaceful achievement of our target of demanding for full disclosure about the illness of President Buhari.

“We also state that we will not be provoked into resorting to violence or any such activities that will violate our core principles and ethics.

“We urge all Nigerians to be prepared for a long fight and look out for a day of global action. God punish the evil doers that put Nigeria in the precarious situation it is today!”