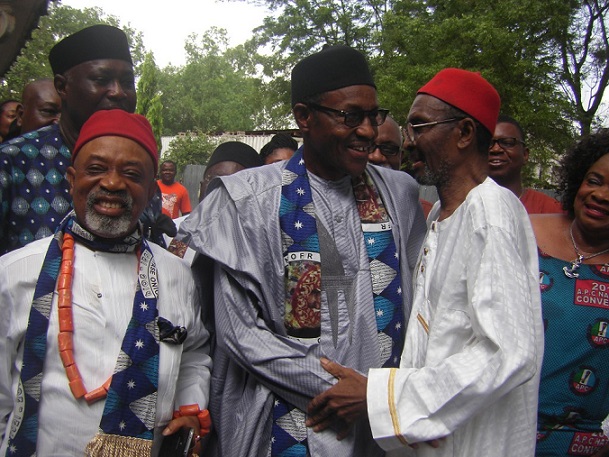 Speaking when a delegation of leaders of Igbo Mandate Congress (IMC) led by its Director General, Rev Obinna Akukwe paid a condolence visit to the family, over the demise of Zik’s first son and Owelle of Onitsha, Dr Chukwuma Azikiwe, the youngest brother to the first republic President, Akunne Ara Azikiwe said that “Buhari is the man that will take Nigeria to the next levels of its existence”.

Akunne Ara Azikiwe who led the delegation that represented the Azikiwe family during the inauguration of President Buhari on Friday told the delegation of IMC shortly after the inauguration that “it is only Buhari that has the will to take on the cabals that held Nigeria hostage and break their stranglehold. Obasanjo had the goodwill but along the line he failed to live up to expectations. Yar’adua was not able to accomplish much due to his illness. Jonathan had the good intentions too sycophants held him hostage and ruined what could have been a transformation agenda for Nigeria.”

Going further, Ara Azikiwe said that “ the late Owelle of Onitsha, Chukwuma Azikiwe had always maintained a cordial relationship with the incumbent President Buhari which had spanned over two decades and the Owelle had sometimes visited Buhari in Kaduna because the family believed that a lot of ideals for which Rt Hon Dr Nnamdi Azikiwe, the Zik of Africa stood for has rubbed off on Buhari. Zik never believed in corruption and elitist politics and always believed in government getting to the grassroots, these ideals are displayed by Buhari ‘’

Ara Azikiwe said that “the wind of change has nothing to do with tribe; it has much to do with the desire of Nigerians to get rid of corruption before it swallows the nation and the anti-corruption stance of Buhari suits the ideals of the Azikiwe family.’

He warned that “Buhari must ensure that those who manipulated the good intentions of the outgoing President do not appear again through the back door. President Jonathan initially started well but along the line some sycophants took over the reigns of government and derailed what could have been a truly transforming government. I thank God that Jonathan’s concession of defeat has elevated him above his peers.”

The fate of Igbos in Buhari Government attracted Azikiwe’s outburst who said that “ Buhari had not shown tendencies of tribal discrimination and his relationship with the late Owelle had been cordial for many years, even when all Nigerians abandoned him after failing thrice to become President in 2003, 2007 and 2011, and the family believes that under him, Igbos have nothing to fear.”

Azikiwe revealed that “It was Buhari that insisted during zoning of offices in APC that the Senate Presidency must go to the South East, can an Igbo hater do such. It is unfortunate that there is no APC ranking senator from the South East to occupy the position.”

Ara Azikiwe insisting Buhari got more votes than was allocated to him in the South East said “even you Rev Akukwe and other Igbo Mandate Congress leaders who monitored elections in the South East had earlier reported massive inflation of votes against Buhari by the PDP , therefore it is wrong to say that Igbos did not vote for a northerner, those going to beg Buhari to forgive them for voting Jonathan are not representing us, they should rather ask those who stole Buhar’s votes in the South East to return it, and if the Owelle had not died suddenly, he would have called them to order”

Ara Azikiwe praised Jonathan for conceding defeat stressing that ”Jonathan’s concession of defeat is an act of wisdom, maturity and heroism and posterity will remember him for averting another civil war”

He insisted that the Azikiwe’s belong to every party and praised some APC,PDP and APGA governors whose records of performance are encouraging.

Azikiwe said that the family is making consultations with Igbo and Nigerian leaders and will soon fix the date for the burial of Owelle, before communicating with the public.

Akunne Ara Azikiwe was among the leaders of Igbo Mandate Congress (IMC) who successfully mobilized the Presidents of Ohanaeze Ndigbo in the 19 Northern States and FCT to reject the directives of the national body of the group to vote Jonathan, after collecting a few billions as gift, insisting that they must return the outgoing President’s money and allow Igbos in the north to vote their conscience.

The delegation which represented the Azikiwe family during the Presidential Inauguration of Buhari led by Akunne Ara Azikiwe included Chief Chukwuma Njaka( PA to the late Owelle Chukwuma Azikiwe) and Mr Okey Okirie (SA to Rivers State Governor Amaechi on Statistics and Strategic Planning) who is an in-law to the family.