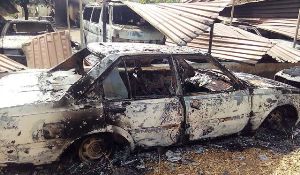 Unidentified gunmen attacked the Government Girls Secondary School in Yana, Bauchi State yesterday, where they set fire to staff homes and seized the principal’s car.
The incident came a week after a similar attack at a girls’ secondary school in Chibok, Borno State, in which more than 100 female students were abducted by suspected Boko Haram militants.
In the pre-dawn raid on Yana, the gunmen did not take any of the 195 final-year students who were around in the school for their senior school-leaving certificate examinations.
But the attackers went on the rampage in the school premises and elsewhere in Yana, which is the headquarters of Shira Local Government Area.
The attackers destroyed a bank building, part of the police barracks, a conference hall and 15 vehicles at the local government secretariat, and several cell-phone towers.
A five-year-old boy was also burnt to death in the blaze at the police barracks, residents and authorities said.
The incident was the second in a week in Yana, coming just six days after the attack at Mothercat construction company site where gunmen seized some dynamite.
The Bauchi State Police Command confirmed yesterday’s attack.
“The gunmen stormed Yana around 2.30am on 20 April 2014 and set ablaze staff quarters, school bus of Government Girls Secondary School (GSSS) Yana, eight-man block of police rank and file quarters, GSM masts for MTN, Glo, and Etisalat,” Police spokesman DSP Haruna Mohammed told journalists in Bauchi.
He added that the gunmen also attacked a branch of First Bank and destroyed the vault, and burnt a conference hall of the local government secretariat as well as 15 vehicles in the secretariat.
“Apart from a 5-year-old (boy) who was burnt to death, no other casualties as all the students are intact while the private vehicle of the school principal was taken away by the hoodlums,” he said.
Mohammed said a combined team of security forces were on the trail of the attackers.
A reliable security source told Daily Trust: “The gang burnt part of LGA secretariat, part of Government Girls Secondary School Yana, but all the 195 girls writing WAEC in the school are intact. First Bank, Etisalat and Glo masts were also destroyed.
“Soldiers from Bauchi and Jigawa ambushed the gunmen on their way back, and some rocket-propelled grenades, explosive devices, motorcycles and a Hilux pick-up truck were recovered from them.”
A Daily Trust correspondent who visited Yana town hours after violence reported seeing ruins of the attacked structures.
Residents said the gunmen, riding motorbikes, stormed the village from different directions, shortly after a downpour, and began firing gunshots and detonating explosives.
“It was raining late in the night, and shortly after the rain had stopped, we began to hear explosions and gunshots all over the town,” a man told the BBC Hausa radio.
He said apart from the places attacked, “there was a boy forgotten at the police barracks, who was burnt beyond recognition.”
Daily Trust learnt that the attack lasted for about two hours, as the gunmen operated unchallenged.
They then left westwards towards Gwaram town, which had also seen a deadly attack recently.
Following the destruction of some cell-phone towers, residents of Yana said they are now left with only signals of Airtel.
Speaking to Daily Trust, a community leader appealed to the government to provide adequate security to schools and rural communities.
He said only God saved the students in GGSS Yana, “otherwise it would have been a different story by now.”
Serial attacks
The violence in Yana is the latest in the series of attacks by unknown gunmen in the north-central part of Bauchi State.
At least 10 attacks were reported since February in different towns and villages.
On April 16, a team of security forces foiled an attack by some unknown gunmen on Misau, according the police.
A day earlier, gunmen snatched two United Nations vehicles and another government vehicle in Soro, Ganjuwa Local Government Area.
On April 16, hoodlums ambushed customs officers between Sade and Lanzai villages in Darazo LGA, killing two officers.
On March 29, gunmen kidnapped businessman and politician Alhaji Manu Soro.
On March 4, a member of the Bauchi State House of Assembly, Yusuf Nuhu, was abducted in his residence in Zalau village in Toro LGA. Two days earlier, gunmen seized three polio workers in Darazo.
On February 18, the police foiled an assassination attempt on PDP chairman of Shira LGA. A day earlier, gunmen kidnapped a former House of Representatives member, Alhaji Sama’ila Ahmed Ilalim, in Darazo.
The serial attacks have sparked fears in the communities that the gunmen could be Boko Haram fighters, who reports said had set up camps in neighbouring forests that stretch into Jigawa State.
People in Darazo area were said to have noticed the sudden appearance of sizeable numbers of armed men in the forests. They were said to have established a temporary camp and often engaged in armed drills.
The police had said last month that they were aware of the reports on presence of strange gunmen and were doing something to contain the situation.