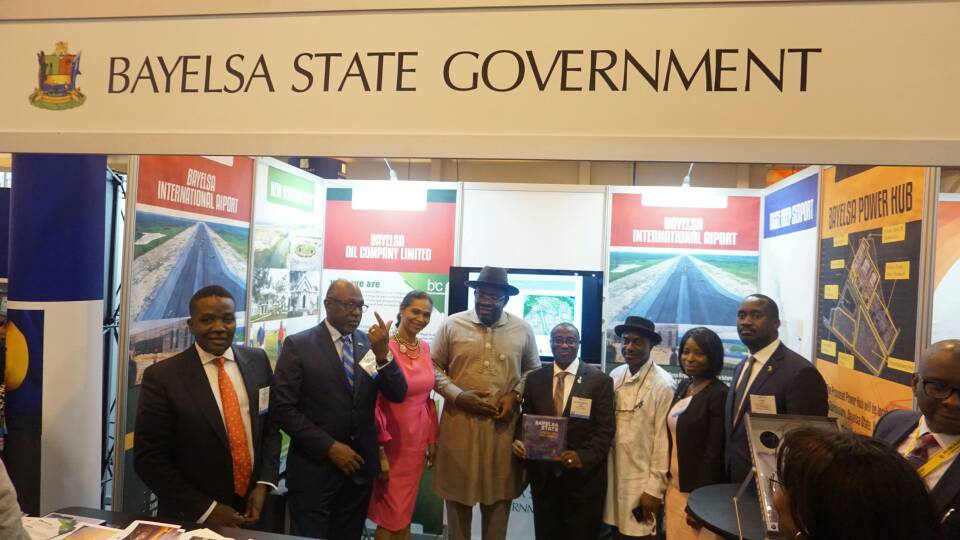 A press statement signed by the Governor’s Chief Press Secretary, Francis Ottah Agbo noted that the Governor was speaking on Tuesday during a session with the NNPC at the ongoing Onshore Technology Conference (OTC) in Houston, USA. The governor stressed that making Bayelsa the Houston of Africa is realizable if the NNPC GMD, Dr. Maikanti Baru and the critical players in the oil and gas sector collaborate with his government.

He recalled that Bayelsa participated fully in last year’s OTC which updated their knowledge in the oil and gas sector and helped them to take more far reaching policy decisions and embarked on more critical projects in the sector to effectively market the state to potential investors. Dickson said his government has created the enabling environment for investments, including investments in the oil and gas sector to thrive in Bayelsa State as well as guarantee a high return on all investments.

He averred that the state is safe and peaceful for investments and called on potential investors to make the littoral state their choice destination.

He said Bayelsa State has over 30% of the of the gas reserve in Nigeria, stressing that for anyone thinking about investment opportunities in gas, ‘‘where to go is clearly Bayelsa and there is no doubt about that, which is why we are here to market that comparative advantage to the investing world.’’

He said:  ‘‘ Bayelsa State is safe, peaceful and ready for business. Our government has created the conducive and enabling environment for investments to flourish, including investments in the oil and gas sector … We were here last year and we had fruitful deliberations which sharpened our perspectives. On returning home, we took a lot of steps and we are here this time around to market Bayelsa as the world’s best kept investment secret to the global investing community especially in oil and gas.

‘‘We have started an Eco-Industrial City. So if you are interested in using gas for industrialisation, where to go to is Bayelsa. We are building a Deep Sea Port and we’ve got to provide power. We are building a power hub, a new Yenagoa City, we are building an International Airport and a host of other initiatives that will be attractive to investors.

‘‘We in Bayelsa have a dream of working with the NNPC and other players to make Bayelsa State the Houston of oil and gas in Nigeria and in Africa. Bayelsa is historically the headquarters of oil and gas in Nigeria and in Africa and working with the NNPC GMD,  Dr. Maikanti Baru and his team, and with the support of everyone else, Bayelsa State Surely will be the Houston of Nigeria and Africa. I want to thank the GMD for his support, encouragement and collaboration in that direction. I also thank the Chairman of PETAN and all the members of the PETAN community for their support.

‘‘I want to thank the GMD of NNPC, Dr Baru who has advanced the frontiers of NNPC so much that the NNPC is now getting ready to play in the big league internationally. I am also impressed that the GMD stopped over yesterday while leading the Nigerian delegation including the chairman and members of PETAN to encourage us, and he is here today once again, to underscore the importance of using technology to create jobs, open new frontiers in the oil and gas sector and as well as attract investments to our country. In the end, if every state in Nigeria is prosperous, if every state takes advantage of the abundant natural resources to create wealth and develop skilled manpower, then that translates to prosperity for our country.’’

In his response, Baru described Bayelsa State as is a trail Blazer with a visionary Governor. He promised to collaborate with the governor and support Bayelsa State Government in its investment drives.  He said the NNPC will assist the state government with evaluation, such that only viable projects are admitted into these world- class facilities being developed in Bayelsa State. While noting that Bayelsa State was the only state with a Stand at the OTC, Baru called on other state governors to borrow a leaf from Dickson.

He said: ‘‘When His Excellency, Governor Dickson visited the OTC last year, and subsequently paid me a visit, we discussed on issues bordering on why Nigeria cannot do what other countries and governments are doing…He also discussed some of his lofty ideas of building Industrial Parks with me, and of course, all the associated infrastructure that are required.

‘‘If you build an Indusrial Park, you are building an area where investors will come and have ready -made feedstock. Whether a refinery or fertilizer plant, the plot must be set and by being set I mean it will have all the necessary utilities and the feedstock piped to that location. So all that is needed for the investors to do is to site their plant, connect to the feed stock and commence operations.

‘‘In addition to this, the Industrial Park should have housing facilities to accommodate all who will work in the industrial park because these equipments however hi-tech they are, require people to man them. In addition to that, the Industrial park will have schools, gaming facilities and various entertainment facilities that it requires. And there will also be a need for an airport because not everything comes through the water way or the road. And of course, to have an airport, it must be done to the extent that it can host heavy lift aircrafts as well as wide bodied huge aircrafts.

‘‘Bayelsa State has been developing its airport which meets these standards and impressively, it is almost reaching completion. I was impressed about the presentation at the Bayelsa State exhibition stand because they did not only take on the project but demonstrated that they are almost done with a 3.5Km runway airport that can land a 747, an A380 and of course it can land the heaviest lift aircraft that we have in the world. ‘’

The NNPC GMD was also impressed that Bayelsa State investments will shore up the political economy of the state adding that the Bayelsa heavy lift airport will be useful even to the neighbouring states of Rivers, Delta, Edo, and Akwa-Ibom states and in deed the entire country.

On the Deep Sea Port, he also commended Bayelsa State for being the only state in Nigeria that has 14metre draft and is underway to be deepened to 20metre.

He believes after completion of the Deep Sea Port, there will be a lot of movement of goods, facilities and heavy equipment vessels away from Lagos Port to the Bayelsa Port which he reasoned will be a great relief for the various industries ‘‘because it will ensure that heavy goods are brought closer to the locations of use and of course, it will be cheaper and good for all.’’