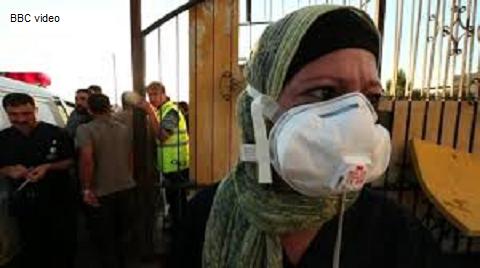 UPDATE: Within 2 hours of posting this story, the BBC filed a copyright claim with YouTube to get the 45 second clip removed. This shows how nervous the BBC is about this information coming to light. News organizations routinely rely on dubious copyright claims to censor damaging revelations. An copy of the video via LiveLeak is embedded below.

A video of a BBC interview with a doctor in Syria in the aftermath of a napalm-style attack appears to have been artificially dubbed to falsely make reference to the incident being a “chemical weapons” attack, a clip that represents “a stunning bit of fakery,” according to former UK Ambassador Craig Murray.

The news report was first released on August 29, just days before an attack on Syria seemed inevitable, and served to further the narrative that military action was necessary to halt atrocities being committed by President Bashar Al-Assad’s forces.

The first clip (watch here on BBC) is from the original interview with British medic Dr Rola Hallam, from the Hand in Hand for Syria charity. She states;

“..It’s just absolute chaos and carnage here, erm we’ve had a massive influx of
what looks like serious burns, er seems like it must be some sort of, I’m not
really sure, maybe napalm, something similar to that..”

However, in the second clip (watch here on BBC), which is from the exact same interview, her words are slightly altered.

“..It’s just absolute chaos and carnage here, erm we’ve had a massive influx of
what looks like serious burns, er seems like it must be some sort of chemical
weapon, I’m not really sure..”

The second clip seems to have been artificially dubbed to characterize the event as a “chemical weapon” attack rather than an incendiary bomb attack. Hallam’s mouth is hidden by a mask, making the dub impossible to detect without referring to the original clip.

The clip has sparked frenzied analysis by numerous Internet users, who point out that the background noise in the clip that uses the “chemical weapon” quote is different from the original. The BBC has been asked to explain the discrepancy but has so far not responded.

“I suspect the motive in this instance and others by the BBC are propaganda intended to affect public opinion in the UK in such a way as to congregate support and underpin an offensive against the Syrian government,” writes one user who closely analyzed the audio.

In a subsequent BBC interview, Dr Rola Hallam complained about the UK Parliament’s refusal to authorize a military strike on Syria. Hallam’s father is also on the Syrian National Council, the political body which represents opposition militants.

Hallam’s bias in supporting military action while working for a charity in Syria and being linked to the FSA makes the video clip all the more intriguing. It also explains why the BBC, which has aggressively pushed for military intervention in Syria from the beginning, is apparently using her to stage propaganda.

Former British Ambassador to Uzbekistan Craig Murray said the video represented, “Irrefutable evidence of a stunning bit of fakery by the BBC,” adding that the woman’s words could have been faked in their entirety.

“The disturbing thing is the footage of the doctor talking is precisely the same each time. It is edited so as to give the impression the medic is talking in real time in her natural voice – there are none of the accepted devices used to indicate a voiceover translation. But it must be true that in at least one, and possibly both, the clips she is not talking in real time in her own voice. It is very hard to judge as her mouth and lips are fully covered throughout. Perhaps neither of the above is what she actually said.”

“Terrible things are happening all the time in Syria’s civil war, between Assad’s disparate forces and still more disparate opposition forces, and innocent people are suffering. There are dreadful crimes against civilians on all sides. I have no desire at all to downplay or mitigate that. But once you realise the indisputable fact of the fake interview the BBC has put out, some of the images in this video begin to be less than convincing on close inspection too.”

A link to Murray’s blog on the issue was also tweeted by Wikileaks, the whistleblower organization, under the headline,’ BBC puts out fake video with Syrian medic claiming chemical weapons.’

This would by no means be the first time that evidence of war crimes has been staged in order to lay the blame on Bashar Al-Assad’s forces.

As we have previously highlighted, there are numerous videos showing supporters of the western backed FSA staging fake injuries and deaths for propaganda purposes.