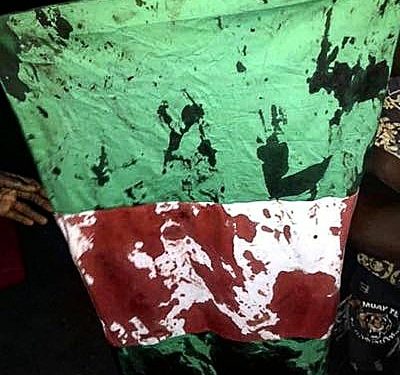 As disinformation by paid agents of the General Muhammadu Buhari regime, reaches unprecedented levels, the British Broadcasting Corporation, BBC has had to come out and denounce a propagated fake news by government agents, that it apologised for its reportage on the lekki massacre.

This reaction was in response to the below fake news snippet which has been widely spread by government agents in their desperate battle to deny justice for the dead and injured dozens of the Lekki massacre:

“We apologise on our reports on d Lekki “massacre” in Lagos Nigeria almost all d informations we got were fake and misleading – BBC” (FAKE!)

The BBC quickly denied this so called apology as concocted by Adebayo Shaeed Adeyemi:

Twitter recently has been closing thousands of fake accounts being opened daily by agencies and paid agents of the Nigerian government, for the purpose of distorting the reality of the news and protests with purposeful misinformation with ultimate goal, the final clampdown on free speech and the right to protest.

The Nigerian government invests billions of naira in paying political thugs to turn peaceful protests violent and likewise invests massive sums in a disinformation army who create fake twitter handles and handles similar to those of concerned citizens, then use these to propagate fake stories related to the protests and demands of true Nigerians. This, so later once the many fake are seen, the images of the real horrors and atrocities will be hard to find, and buried in the sands of fake news along with the bodies mass buried by army General Buratai.

Lekki Massacre witness, DJ Switch decried fake handles being created with social media names similar to hers, which were engaged in posting disinformation, including a fake post of “78 dead” which she said a fake handle named liker her name posted with purpose of drowning her real narratives of the 15 she had counted dead.

In Nigeria the government invests heavily in burying the truth along with victims of its brutality.