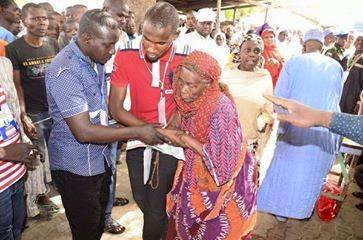 Many Nigerians were not angry with the reportedly massive irregularities that characterized and dominated the 2003 and 2007 General Elections as much as they were with the verdicts from the various election petition tribunals across the country, notably those judgements from the Supreme Court which affirmed the ‘elections’ of Obasanjo in 2003 and that of ‘Yaradua in 2007. Some researchers I recently discussed with have expressed the fears and reluctance of conducting studies using alleged ‘inflated’ figures from various Nigerian General Elections which unfortunately have already made their way into our National Archives. If you think their fears are unfounded, how on earth can you explain election figures showing almost 100% or more voters’ turnout in certain places or one giving the impression that even dead people voted? How can you swallow the (il)logic of a people continuously and overwhelmingly ‘voting’ for a particular party in certain states in 5 straight elections despite the clear visibility of bad governance everywhere in such states? These are some of the things that many of our courts are directly and indirectly endorsing as correct.

It takes one of the most morally bankrupt consciences to rig an election, but it takes even a more morally bankrupt one to legitimize and affirm it. One wonders where the aggrieved person in an election can find justice if he can’t find it in the tribunals. Before and after elections, multiple alarms of foul play are being raised in different quarters and during the course of the elections, many candidates usually complain of rigging, violence, manipulation and oppression, but all INEC could do was to tell them to head to court if they were not satisfied. Does this means INEC itself is satisfied with all elections it presides, no matter how dirty and those dissatisfied should go to court? Is it even a matter of satisfaction or dissatisfaction? With this development, it is therefore the duty of the election tribunals to rescue the people from being governed through illegal mandates in various capacities-a duty which they have so far failed to adequately perform. The Electoral Act itself has badly incapacitated the electoral process to checkmate rigging and punish riggers.

The elections petitions tribunals in 2011 did not fare any significantly better than those of 2003 and 2007. Over the past few weeks, outcomes of various 2015 election tribunals have left many people baffled and dejected. Some of the outcomes are simply bizarre to say the least, even though not all were completely unexpected.

It has gradually become very clear that once you were not declared winner after the polls, you stand virtually no chance of reclaiming your mandate in the courts. First, the tribunals give much emphasis on flimsy technicalities and often dismiss several petitions on such grounds. Secondly, they often summarize all arguments and evidences brought before them as having failed to prove the case ‘beyond reasonable doubt’- an ambiguous phrase now so popularly and notoriously used to dismiss many competent cases.

There are so many problems bedevilling the quest for electoral justice in Nigeria. The first starts with the constitution of the tribunals themselves. Quite often judges and tribunal members are hurriedly constituted from entirely different areas from where the elections took place, leaving them with virtually zero knowledge on what happened in the area or how the area is. Although, every tribunal is expected to only rely on arguments presented before it and not otherwise, we cannot say that knowledge of an area will not help a judge to make better informed decisions on so many things. The time frame for settling electoral cases and the unnecessary delays and adjournments of proceedings within such time frames is also another critical problem. The ‘winners’ are allowed to be sworn in and properly settle in power while petitioners are left to wander and wallow in search of justice. Winners, after being sworn in may use state resources to not only diligently prosecute their defence in the tribunals through competent and experienced lawyers, but also to scuttle any efforts for justice to be done against them. This is apart from the likelihood of using same resources to adequately prepare and gain upper hands in case of a re-run. These are luxuries which the petitioner does not only lack, but also struggles to maintain his tempo after the elections and sustain his zeal enough to prosecute his case. He finds things very difficult and in some cases he has to even pay his witnesses in addition to other things.

Secondly, the tribunals are themselves inadequate. Two tribunals are set up per state; one for the governorship and the other for the national and state assembly elections with very few-often an average of one per geo-political zone- Appeal Courts serving the entire country. The national and state assembly elections are packed with several cases which are expected to be settled within limited time. As such, the tribunals hardly give enough attention to each case. Elections are not perfect, that is why we have election tribunals and their duty is to ensure speedy justice. Justice must not be delayed because it is totally unfair and unacceptable for someone to continue sitting on an illegal or stolen mandate for long just because the tribunals are dragging the case for whatever reason.

Thirdly, INEC is not playing the role of a truly unbiased electoral umpire in the hearings of election petitions. In the cases, INEC’s objectives should not be about defending its actions no matter how wrong during the elections, it should be about defending the truth; it doesn’t matter whether the truth was discovered after the polls. INEC Staff are humans; the commission can’t defend their indefensible actions during the elections just because they are joined as respondents in a petition. They should admit their mistakes, take responsibility for their actions, give explanations for them, expose and punish their officers involved and provide the true facts with which the work of the tribunals would be simplified rather than complicating proceedings.

The fourth is the cost of justice in Nigeria. Prosecuting an average case in a Nigerian court needs huge financial resources and time. Many a time, you can’t get justice when you don’t have good lawyers who are hired at exorbitant costs. In election petitions, one may also need the services of forensic experts, data analysts, huge logistic arrangements and other expenses. This often costs a petitioner with a good case but without money his victory in courts.

The fifth but also the most crucial is corruption. The entire Nigerian justice system comprising the police, judiciary and other bodies are perceived by many to be corrupt. Indeed the elections tribunals are seen as some of the worst. There were reports of allegations in 2003, 2007 and even 2011 that judges jostle and lobby to be appointed to preside over election tribunals because of the lucrative prospects involved. Power-monger politicians would stop at nothing to influence and manipulate the election tribunals and to comprise their officials in order to stay in power.

Currently, most of the rulings coming out of the 2015 elections petitions tribunal are not showing a significantly different pattern from the dismal ones of the past, even though there are some signs of little improvement. Many of the judgments are seemingly unjust and hard to comprehend with. The level of success of the Appeal Courts in correcting these anomalies would determine the future confidence level of people in the judicial-electoral process. All eyes would now be on the Appeal Courts who are expected to thoroughly review most of these cases.

If the Appeal Courts fail to salvage the situation and things continue like this, it will reach a level where everyone would think of rigging his way into power since there is every chance that his victory would not be overturned by the tribunal and even if it does, he has every advantage of winning the re-run, except of course if the tribunal chose the rare case of declaring the petitioner as the outright winner. After the 2007 and 2011 elections, the tribunal nullified the governorship elections of Kogi, Bayelsa, Cross-Rivers, Kebbi, Adamawa, and Sokoto states, but the governors all won their re-run elections against their battered and power-less opponents whose energies have been sapped after several months of pursuing their cases at the tribunals. Candidates who could adequately prove that they won elections should be declared winners instead of wasting government funds by ordering for re-runs.

One of the most popular opinions among Nigerian politicians is that it is better to rig elections and be taken to court than get rigged out and go to court. One of the problems with election rigging is that no matter how hard you try, you cannot completely hide it, although you may get away with it and even get the chance to repeat it. The law says everyone is innocent until proven guilty but in reality some people are guilty until proven innocent.