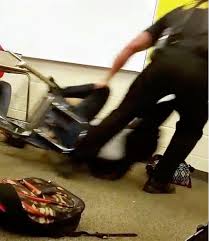 The violent arrest of a black female student by US police shows that being black is the greatest crime in America, says an American analyst.

“It is a long, long standing tradition, and this is the tip of the iceberg,” Daniel Patrick Welch said of a video that shows a US police officer brutally arresting a black female student at a high school in South Carolina.

“This is what it means to be the teenage black girl in post-racial USA, there is no greater crime than being black and that is a sick denunciation of the society we are living in,” the political commentator told Press TV on Wednesday.

“It is an ongoing crime against humanity,” he noted. “And what this does highlight is that there is a normalization that this can be done in a public school classroom and that it could be anyone of our kids.”

A shocking footage of a white male police officer slamming a black girl to the ground and dragging her at a high school in the US state of South Carolina on Monday, has sparked nationwide outrage in the US.

The US government has launched a civil rights investigation into the violent arrest that comes amid public anger over several high-profile killings of unarmed African Americans by white police officers in the past two years.

He also pointed to the wave of “apologism” that is surrounding the issue, criticizing the people who think the violent act by the police officer was justified.

“If a cop did this to a dog there would be all sorts of protests and animal rights abuse people in the streets,” he noted.

Welch said such brutal approaches by the police signals an “over-policing” in the US which is also referred to as “Broken Windows Policing.”

“It is a ridiculous and patently racist and idiotic idea that you have to control these communities, poor communities, largely black and brown communities that are treated like occupied territories,” which creates crime rather than solving it, he said.

“It cries out white supremacy, that is imperialism at its core,” Welch added.