SOME  days ago, I woke up  to find  that someone, or group had decided to change my country. It was there on Facebook; a supposed map of a new country called Biafra. I was neither consulted nor my opinion sought. I am not also aware that the Ijaws, who are my parents, our neigbours the Isokos, Itsekiris, Urhobos, Efiks, Ibibios, Orons etcetera, were consulted. Some fellow Nigerians  in demonstrating their right  to  self-determination, decided that I do not have the  right to be consulted.

If I were to reincarnate and have power of choice, I would ordinarily, not decide to be a Nigerian. I would prefer to be an African, in that united continent Kwame Nkrumah prophesied, with a single government, currency, economy and citizenship.  I will not trade a continent for another small enclave, while industrialised Europe has almost evolved into one entity. That will not be strategic thinking, it will be collective backwardness.

I understand why the agitators need the Southern nationalities; they require their oil and gas resources, and access to the sea. But they are being quixotic by forcing these peoples into a map. They need to consult and persuade. But this will be difficult as the advocates of a new Biafra have not made public any known philosophy, ideology, vision, road map, socio-economic programme or policy, including on peoples and minority rights.

I have read some juvenile Boko Haram Shekarau-like outbursts by the new kid on the bloc, Nnamdi Kalu  of the Indigenous Peoples of Biafra (IPOB) who vomits words like “If they don’t give us Biafra, no human being will remain alone in Nigeria by that time; we shall turn everybody into corpses; you better go and buy your coffin.”  He reminds me of the quixotic ‘uprising’  by the Biafra Zionist Federation led by Benjamin Igwe Onwuka who on June 5, 2014  tried to seize the Enugu State Broadcasting Service (ESBS) ostensibly to declare a Biafra Republic. 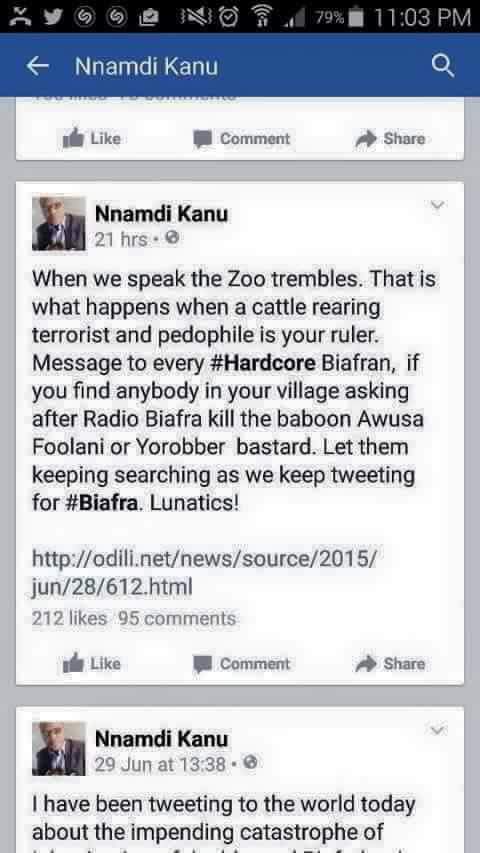 Apart from these, I have seen photographs of people in camouflage doing drills in alleged preparation for war to actualise Biafra. I am not sure they know what they are doing. I was six when the civil war broke out. Until this day, I still recall the faces of my play mates like Ngozi Eze, who left for the East and never came back when their families returned. You imagine the trauma the rest of their families went through. I also, still recall the faces  of my uncles; Anusi, and Wisdom Fakrogha, who went to that war, and never returned. It is not just about the massive destruction, starvation and early graves. It included injuries that never healed, scars that people carry in their hearts. Like John Pepper Clarke wrote, in his poem, The Casualties. “The casualties are not only those who are dead… The casualties are not only those who started A fire and now cannot put out. Thousands are burning that have no say in the matter…We are all casualties”

I read about  people  on both sides, glorifying the civil war. Yes, it was a glorious war; but not for the two million who lost their lives. It was a heroic war; but not for the children taken to Gabon who never returned. War can be glamorous, but not for the dead. Not for those who become invalid, the widowed and the orphaned. For the true victims, the pain never really go away.

For Kalu and his group who argue that the Igbos are a conquered people in bondage, needing to be free, I say the conquered are not necessarily those who are said to have lost the civil war forty five years ago, but those on either side who lost their lives, income, property and loved ones. The victors are not necessarily those who sing victory songs; but those who smile to the banks having made fortunes selling arms and rice, boots and aircraft, bombs and relief materials to all sides in the conflict.

When during  the 1962 Missile Crisis over Cuba, and American President, John .F. Kennedy was  toying with the idea of going to war, then Soviet Union leader, Nikita Khrushchev wrote him, warning “I have participated in two world wars and know that war ends only when it has  rolled through cities and villages, everywhere sowing death and destruction. For such is the logic of war. If people do not display wisdom, they will clash like blind moles and then, mutual annihilation will commence.”

But if we want to persuade our angry compatriots to remain, we must understand  why they want out. I turn to Kalu to understand him. First he claims that the operation of the  Federal  Character provision and development, is lopsided. In other words, Igbos are marginalised. But interestingly, most or all nationalities in the country feel the same way. He says Igbos are killed in parts of the country. Ironically, the ‘killing fields’  today are in  the North East, and Middle Belt where all Nigerians are victims. He argues that Nigeria is an artificial creation. I agree fully with him; but which country is not? Even the Biafra, his group wants to create will also be an artificial one. He laments that while the soldiers on the Federal side  were paid, those who fought for Biafra were not.  Whatever the arguments; this appears more an administrative issue, and less a reason for secession.

He pointed at corruption, mass unemployment and injustice in what he calls the “Zoological Republic of Nigeria” Doubtlessly, there is injustice;  to the poor and powerless; the voiceless and the vulnerable. But the solution  cannot be the balkanization of the country; rather, it is to fight these ills.

Even if I am left out of Biafra as I desire, I don’t want a passport to go drink from the knowledge of Arthur Nwankwo in Enugu, visit Maxim Uzotu, ‘the god of poetry’ or share a drink with Anaele Ihuoma in Owerri.

We cannot deny those who clamour for a new country, but the rest of us  have the duty and right to propagate our desire for a united Nigeria, and an integrated Africa.