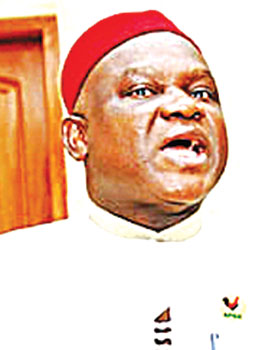 The national chairman of the United Progressives Party (UPP), Chief Chekwas Okorie, has described as reckless the statement credited to the federal government of Nigeria that some politicians were financing the activities of the Nnamdi Kanu-led Indigenous People of Biafra, IPOB.

The Minister of Information and Culture, Alhaji Lai Mohammed, had on Sunday accused “politically disgruntled treasury looters”, who were out to sabotage the President Muhammadu Buhari-led government, of sponsoring the Indigenous People of Biafra, IPOB.

Mohammed said those disgruntled looters were using IPOB to sabotage the current government under the guise of fighting for the rights of the people of the South-east.

Reacting, however, the ex-presidential candidate said it was reckless on the side of the government to make such unhealthy utterance against political players in Nigeria.

He said, “As a politician, I founded the All Progressives Grand Alliance (APGA) to seek power in Nigeria, and I have founded the United Progressives Party (UPP) doing the same thing. Buhari himself had challenged the Igbo to form a political party and use it to seek for what they want within the country called Nigeria.

“I do not, therefore, see how a political party pursuing ideologically rooted agenda, like restructuring, state police, will at the same be sponsoring such a movement. We are for unity of Nigeria, a Nigeria that where there is equity, justice and fair play.

“It is reckless for a government to make such a statement, suggesting that politicians from the South-East were behind it, unless he is talking of Fulani politicians and those from the North-West. Don’t forget, Ralph Uwazurike, leader MASSOB, had said it was politicians from the north that were sponsoring IPOB. May be that is what the government was referring to,” Okorie, said.