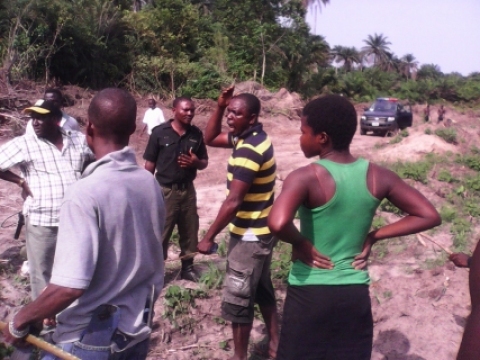 Africa’s richest man Aliko Dangote and Lagos State Governor Babatunde Fashola are using ruthless police officers to evacuate residents of the Idasho community in order to facilitate the billionaire’s take-over of a huge parcel of land.

Police officers from the Special Anti-Robbery Squad (SARS) today invaded the Idasho community to force the residents out of their land which Mr. Dangote, a billionaire businessman, wants to acquire. Eyewitnesses told SaharaReporters that the policemen arrived at about noon (Nigerian time) and arrested any residents who protested their invasion. Two eyewitnesses also reported that the officers began shooting in the air and lobbing teargas at Panseke, one of the villages in the community.

One resident said the policemen were irked when some members of the community accosted them and served them a notice indicating that the land is a subject of an ongoing lawsuit. The invading officers defied the notice of court process. They arrested and took away residents, including women, who informed them that they were in court over the land.

“Who born you?” one of the police officers reportedly said, waving off the residents.

A few weeks ago, Governor Fashola had told community leaders in the affected area that their land would be used as the site of a petrochemical plant proposed by Mr. Dangote. The community leaders had protested the move, demanding to be duly resettled and fully compensated.
A community spokesman who asked for anonymity accused the Lagos State government, in collaboration with the handlers of the Lekki Free Zone Project and Mr. Dangote, of being determined to force the residents out without any form of compensation or resettlement.

Mr. Fashola had earlier used policemen from nearby local police stations to terrorize the residents of the community. A resident claimed that the governor and Mr. Dangote decided to call in officers from a dreaded anti-robbery unit because the local police officers, on learning that the case was in court, had declined to continue harassing the residents.

A police officer at the Akodo Police Station near the community told SaharaReporters that they had shown reluctance to heed Governor Fashola’s deployment requests to the community, stating that they were aware the disputed land was in court.

A community member accused Mr. Dangote of using his wealth to manipulate policemen from the SARS to “clear” the area of residents in order to move forward with his refinery project.

Several residents also asserted that, two weeks ago, the Lagos State Government had used police officers to frame up residents by accusing them of stealing tools from the site. They said officials of the Free Zone management raised a false alarm that some equipment was missing from the site they proposed for Mr. Dangote’s petrochemical plant. “Police just came here and arrested people,” one of the residents disclosed.

A member of the staff of the Free Zone confirmed to our correspondent that no tools were missing or stolen. Even so, the arrested residents were arraigned in court on trumped-up theft charges.

“This is a vicious attack on us by Governor Fashola. He desperately wants to give our land to Dangote without doing the proper thing,” one community leader said.

One resident said he called his sister, arrested by the invading police, to know her whereabouts, but a police officer answered her phone. The man said the officer warned him that they were on a mission to “clear the land for Alhaji Dangote.”