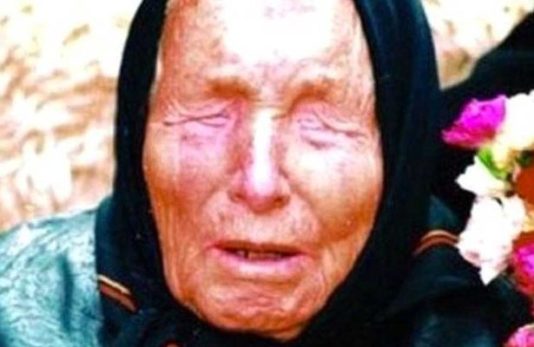 The psychic made hundreds of predictions in her 50-year career, including accurately predicting the sinking of the Kursk in 2000. Her millions of followers believe she had paranormal abilities including telepathy and could communicate with aliens

Baba Vanga ‘saw’ may natural disasters and warned about conflicts before they happened.

She died in the mid 90s aged 85, but the Eastern European hinted at what we could expect in the future and became known as ‘Nostradamus of the Balkans’.

It has now been suggested she predicted Vladimir Putin and Russia will dominate the world.

In a meeting with writer Valentin Sidorov, Vanga in 1979, BirminghamLive reported she said: “All will thaw, as if ice, only one remain untouched – Vladimir’s glory, glory of Russia.

“Too much it is brought in a victim. Nobody can stop Russia.

“All will be removed by her from the way and not only will be kept, but also becomes the lord of the world. ”

The mystic reportedly predicted the COVID-19 outbreak “years ago” when she warned a visitor “the corona will be all over us” ( Image: Newsflash)

Before her death, Vanga predicted glorious future for Russia once more, the Daily Post reported

According to the clairvoyant, Russia will be the world’s only superpower.

She also made a chilling prophecy about the use of nuclear weapons and World War 3.

Blinded after being picked up by a freak tornado as a child, Baba Vanga – born Vangelia Gushterova – believed she had the ability to foresee the future. She reportedly made hundreds of predictions in her 50-year career.

She shot to prominence after accurately predicting the sinking of the Kursk in 2000.

Her millions of followers believe she had paranormal abilities including telepathy and being able to communicate with aliens.

Her numerous predictions about world events and the state of humanity have become infamous, including claims she predicted the rise of ISIS and the fall of the Twin Towers.

The Irish Mirror also told of her chilling predictions today and how some of them have come true.

Specialists have since calculated that 68 per cent of her prophecies had happened – slightly less than the 85 per cent claimed by her followers.

These are some of her other previous predictions:

In 1980 the blind prophetess predicted that in August of 1999, “Kursk will be covered with water and the whole world will weep over it.”

Kursk was a Russian sub that Sank in the Barents Sea on August 12, 2000, killing all aboard.

Baba’s Putin predictions may turn out to be entirely wrong

In 1989 Baba Vanga said: “Horror, horror! The American brethren will fall after being attacked by the steel birds. The wolves will be howling in a bush, and innocent blood will be gushing.”

Europe will cease to exist

According to Baba Vanga, the continent will cease to exist by 2016, and all that would remain will be empty spaces and wasteland, nearly devoid of any form of life.

Clearly not exactly right, but the UK did vote to leave the EU on June 23, 2016, creating a lot of turmoil.

She is reported to have said that chemical weapons would be used by extremists against Europe (or perhaps a nerve agent).

Barack Obama will be the last president of the US

Baba Vanga had predicted that the 44th US president would be an African American, but she had also added that he would be the last one.

She claimed he would leave office at a time when the country would be in economic ruins, and there would be a huge divide between the northern and southern states – as was the case during the American Civil War.

Baba also appeared to predict that the 45th president of the United States – who we now know to be Donald Trump – would be faced with a crisis which would “bring the country down”.

Her chilling prediction states: “Everyone will put their hopes in him to end it, but the opposite will happen; he will bring the country down and conflicts between north and south states will escalate.”

Some speculate the references to “north and south” could mean North and South Korea.

Baba’s predictions have been revisited after another mystic, who apparently foretold Donald Trump’s presidency, claims to know the exact date World War 3 will start.

Self-proclaimed ‘messenger of God’ Horacio Villegas believes nuclear war will break out on the 100th anniversary of the visitation of Our Lady of Fatima.

The clairvoyant claims to have envisioned Trump would win the US election as far back as 2015.

He reportedly predicted the billionaire businessman would become the “illuminati king” who will “bring the world into WW3 ”.

“Cold regions will become warm … and volcanoes will awaken.

“A huge wave will cover a big coast covered with people and towns, and everything will disappear beneath the water. Everything will melt, just like ice.”

According to the prophetess, China will become a world power in 2018.

She’s probably out a few years here as China is already an economic and military powerhouse.

We’ve also apparently got a change in the Earth’s orbit to look forward to some time before 2023.

A new energy source will be created and global hunger will start to be eradicated between 2025 and 2028. A manned spacecraft to Venus will be launched.

Baba Vanga’s predicted that body organs will be cloned by 2046, and that would be the easiest method of treatment.

Between 2072 and 2086 a classless, Communist society will thrive hand in hand with newly-restored nature.

A LOT happens from 2170 to 2256, including a Mars colony becoming a nuclear power and demanding independence from the earth, the establishment of an underwater city and the discovery of something “terrible” during the search for alien life.