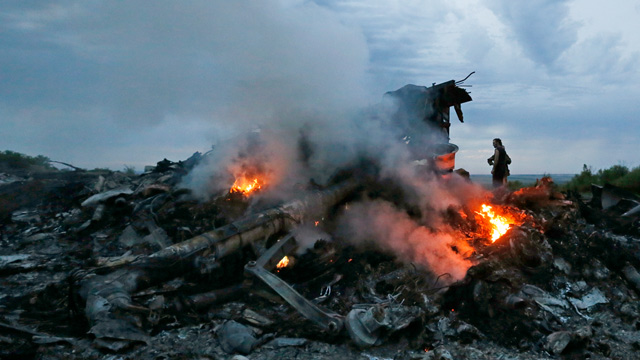 Dutch and Australian police teams have this week for the second time had to cancel plans to investigate the crash site of the downed Malaysia airliner in Ukraine because the Western-backed Kiev regime is waging war on the people of that region.

This is despite earlier promises by the Kiev rulers to call a ceasefire in the vicinity.

The conclusion is obvious: the Western puppet regime in Kiev is going all-out to hinder a probe into the possible cause of the crash, which saw all 298 people on board lose their lives.

Yet, that conclusion is not at all obvious to the Western media. Absurdly, they draw the opposite, that the pro-independence militia fighting the Kiev junta are to blame for blocking an investigation. Even more ludicrous is the logic that the Russian government is to blame, and hence more sanctions are to be heaped on Moscow.

Since Malaysia Airlines MH17 went down nearly two weeks ago, the Western coup-installed junta in Ukraine has stepped up its military assault on the eastern regions of Lugansk and Donetsk, where the doomed Boeing 777 jumbo jet came down.

The self-declared government in Kiev – which came to power last February with the help of covert US and European destabilization of the elected authorities – has been waging an “anti-terror” campaign against the ethnic Russian populations of eastern Ukraine. The people of the east refuse to recognize the legitimacy of the Western-backed neo-Nazi regime, which has regularly and openly called for the destruction of Russian “sub-humans”.

Over the past few months, some 1,100 people – mainly civilians – have been killed in the fighting between Kiev’s military forces and the self-defense militia set up to in the eastern regions. Over 200,000 people have been forced to flee their homes and seek refuge across the border in Russia’s Rostov province.

In the two weeks since the MH17 crash, the Kiev regime forces have killed dozens of civilians from bombardment of towns and villages in the vicinity of the crash site. Up to 30 people were reportedly killed in the town of Gorlovka this week. Heavy violence is also taking place in the towns of Shahktarsk and Torez. Whatever happened to Kiev’s declared ceasefire last week to allow a crash probe to proceed?

This is the context in which the Malaysian airliner was brought down. The precise circumstances are not yet known. It could have been hit by an anti-aircraft missile; or blown out of the sky by a bomb planted on board. Some local eyewitnesses have claimed that they saw a fighter jet fire on the passenger plane in mid-air.

Already, most of the bodies of the nearly 300 victims have been recovered and sent back to the Netherlands for examination, as have the flight recorders, which are currently being analyzed by British aviation experts. That salvage effort, so far, was made possible by the pro-independence militia fighting against Kiev regime forces. Dutch and Malaysian investigators publicly thanked the militia for their efforts.

Equally important, perhaps more so, to the overall disaster investigation is the forensic examination of the actual crash site, where the fuselage of the airliner and other fragments remain strewn across fields. Shrapnel traces, rupture profile and scatter pattern of debris would give an assessment of what exactly caused the plane to crash.

Tellingly, before any probe has got under way the US and its European allies have whipped up a media frenzy to finger Russia over the airliner disaster. No evidence has been provided to support these reckless, premature claims. Indeed, some of the so-called US evidence of alleged militia phone intercepts and videos of missile launchers have been shown to be fake.

At times, Washington has even contradicted itself, claiming on some occasions that it is confident Russia is linked to the crash, while at other times saying it does not know. This vacuity has not stopped Washington and its European allies piling on accusations against Russia and moving this week to ratchet up economic sanctions on Moscow.

Russia, on the other hand, has provided verifiable satellite, radar and air traffic control data to show that the Western-backed Kiev regime forces may well have shot down MH17.

For his part, Russian President Vladimir Putin has called for the horror of Flight MH17 not to be politicized, and for all parties to allow a free and independent investigation to take place.

It is Putin’s reasonable attitude on the matter that seems to be what is really vexing Washington. The Russian leader is not acceding to Western pressure that is attempting to make him the “bad guy”.

And Putin is right. The terrible loss of human life on the Malaysian airliner would not have happened if it were not for the situation of chaos and violence that the West has unleashed in Ukraine from its illegal regime change and the ongoing military assault on the eastern regions.

It is Putin’s unwillingness to conform to the Western narrative that is agitating Washington in particular.

Tony Blinken, a national security adviser to US President Barack Obama said earlier this week: “Precisely because we haven’t seen a strategic turn from Putin, we believe it’s absolutely essential to take additional measures and that is what the US and European partners intend to do this week.”

By “strategic turn” what Washington means is that Putin is not bowing down to its dictate, not kowtowing to its bullying for hegemony.

The megalomaniacs in US government are pushing Europe and Russia on to a dangerous collision course because Moscow has no inclination to be pushed around, and especially over trumped evidence to implicate it in mass murder.

In all the bluster of Western accusations against Russia, the litmus test of credibility are the following questions: who is blocking the investigation into MH17; why?

Finian Cunningham (born 1963) has written extensively on international affairs, with articles published in several languages. He is a Master’s graduate in Agricultural Chemistry and worked as a scientific editor for the Royal Society of Chemistry, Cambridge, England, before pursuing a career in journalism. He is also a musician and songwriter. For nearly 20 years, he worked as an editor and writer in major news media organisations, including The Mirror, Irish Times and Independent. Originally from Belfast, Ireland, he is now located in East Africa as a freelance journalist, where he is writing a book on Bahrain and the Arab Spring, based on eyewitness experience working in the Persian Gulf as an editor of a business magazine and subsequently as a freelance news correspondent. The author was deported from Bahrain in June 2011 because of his critical journalism in which he highlighted systematic human rights violations by regime forces. He is now a columnist on international politics for Press TV and the Strategic Culture Foundation.More articles by Finian Cunningham
PT
Featured image; Guardian