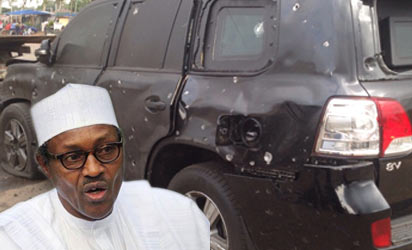 For alleging that a former Head of State, Muhammadu Buhari, masterminded the assassination attempt on his own life last week, the leader of the Niger Delta Peoples Volunteer Force, NDPVF, Mujahid Asaari-Dokubo has come under attack from a chieftain of the All Progressives Congress [APC], Osita Okechukwu.

The convoy of Mr. Buhari, also a leader of the APC, was attacked with a bomb last Wednesday in the Kawo area of Kaduna metropolis. Although he escaped unhurt, two of his aides were injured while scores were killed.

In a statement on Monday, Mr. Okechukwu, who is also the spokesperson of the APC in the South East geo-political zone, said Mr. Asari-Dokubo’s statement was the height of recklessness and sheer irresponsibility because even the enemies of the former military head of state vowed for his integrity, patriotism, uncommon sincerity of purpose and transparency.

“One can understand that Asari-Dokubo is one of the beneficiaries of the present administration, which made it possible for him to own a university,” he said.

“However one is at a loss why the hate monger now posses more information on state matters than President Goodluck Jonathan, the C-in-C, who toed different line when he said those who planned the attacks are clearly sons of devil,

“From all indications, Asari-Dokubo’s diatribe is a betrayal of his phobia that the possible candidature of General Buahri in the 2015 presidential election may put an end to the slush fund accruing to him.”

Describing the NDPVF leader as an ethnic jingoist who preaches hate, Mr. Okechukwu wondered if the late Civil war hero, Mohammed Shuwa, Emir of Gwoza and other uncountable Nigerians who were mowed down by the Boko Haram sect also masterminded their deaths.

He urged the security agencies to interrogate Mr. Asari-Dokubo to enable him provide more information on his claim that Mr. Buhari masterminded the assassination attempt.

“It is now self evident that Asari-Dokubo is privy to critical state security information on the Kaduna mayhem; therefore one calls on security agents to interrogate him forthwith. In sum, it is high time the blame game stops,” he said.