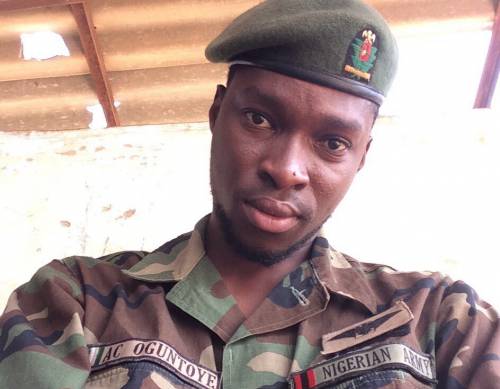 A security source in Maiduguri says Boko Haram terrorists have killed a Nigerian army Lieutenant in an attack in Magumeri town in Magumeri Local Government Area of Borno State on Wednesday evening.

The source said the militants ambushed Lieutenant Akinwale Christopher Oguntoye and his colleagues on their way to Gubio from a shooting range competition in Monguno. The officers were pinned down by terrorists in Magumeri where they razed down houses, including a police station in the town. Lt. Akinwale was a member of the 60 Regular Course cadets of the Nigerian Defence Academy and was briefly an  Aide De Camp to a former President of Guinea-Bissau

The militants rode into the area in 10 utility vehicles, shooting and attacking military formations. A press release from the Nigerian police stated that a police Sergeant Haliru Aliyu was also killed in the attack while another sustained leg injury from gunshots.

A spokesperson to the Nigerian army later said the insurgents who were being shielded by members of the Magumeri community have been subdued.