In review of the new revelations from President Jonathan’s Chief Boko Haram negotiator, Dr. Stephen Davis of Australia, it will be useful we reconsider what we know of Boko Haram, the northeastern terrorist organization.

There are or were two Boko Harams, I and II. 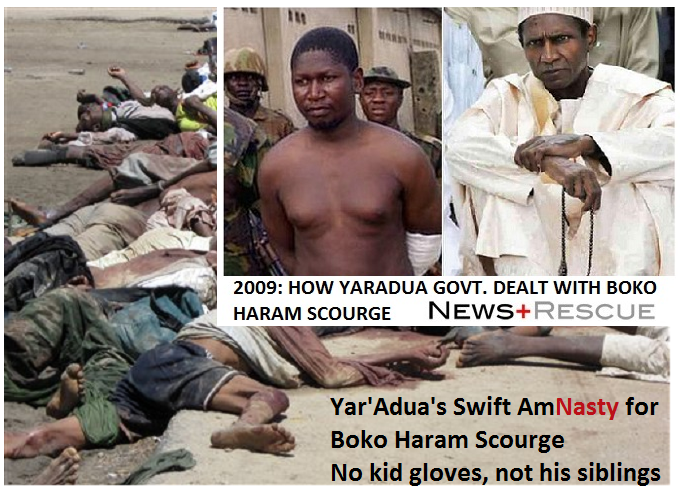 Boko Haram I is better known as and self identifies as the Yusufiyyah movement. These were the disciples of late Mohammed Yusuf, the charismatic leader who promoted himself as a messiah and was expected to reincarnate after he was killed. Boko Haram I was the creation of ex-Borno Governor Ali Modu Sheriff. Though Mohammed Yusuf founded his movement since the 90’s, it was Modu Sheriff who armed and utilized these boys as political thugs; the well known Ecomog forces. After he no longer needed them, he discarded the armed youth and Mohammed Yusuf took charge of them.

In 2009, following an infraction with the law, then capable and efficient President late Musa Yar’Adua with his no nonsense, no dancing and dining with terrorists policy decimated Boko Haram I. Governor Modu Sheriff cooperated and set-up his “friends” in Boko Haram I to be apprehended and killed by the Nigerian army. Sect leader Mohammed Yusuf was killed at this time when he “tried to escape.” For his cooperation against them, Modu Sheriff earned the hate of several sect members.

Boko Haram I was basically dismantled. Nigeria witnessed absolute peace in the northeast as Yar’Adua discussed with northerners and planned strategies to prevent the return of these terrorists. Muslim leaders in Borno and the north agreed to monitor Mosque sermons and ensure that radicalism was no longer tolerated and taught anywhere in the north. Late Yar’Adua had a very efficient long term plan and program, including strictly security monitored “permits” for all public preachers, to ensure Nigeria never again witnessed Maitatsine, Yusufiyyah radical type crisis.

Quote: “Yar’Adua also informed reporters that security agencies had been monitoring and tracking the activities of Yusuf and Boko Haram for several years. He also revealed with some degree of detail that Yusuf and Boko Haram have been “organizing, penetrating our society, procuring arms, and learning how to make explosives and bombs,” adding that “once the military operation concludes in Maiduguri, there will be continuous security surveillance all over the northern states to fish out remnants of the group who are to be dealt with squarely and promptly.”” [URL: https://www.wikileaks.org/plusd/cables/09ABUJA1392_a.html]

With the death/murder of President Yar’Adua, the program in the north was dropped as Goodluck Ebele Jonathan assumed the top office.

The 2010 Abuja independence day bombing perpetrated by MEND Niger Delta terrorists suddenly revealed a “great’ idea for the utility of terror for political success. It is recalled that to the utter surprise of almost all Nigerians, despite MEND claiming the bombing, the Nigerian acting President, Goodluck Ebele Jonathan suddenly said it was not MEND, but rather some northern opponents that were behind the bombing. This publicized falsehood succeeded in creating ethno-religious divides and helped galvanize and deliver non-Muslim support to Goodluck Jonathan and the PDP party.

All of a sudden it was clear that creating and sustaining a northern extremist group that can be pinged on certain alleged northern opponents will continue to divide the nation and maintain non-Muslim support for the President. Boko Haram II was formed in 2011. Enabled by a new lax security effort in the north with the abandoning of late President Yar’Adua and his NSA Sarki Mukhtar’s programs; some elements of the Yusufiyyah movement, aka, Boko Haram I returned with the limited objective to avenge the death of their leader. But suddenly another group evolved from nowhere in the same space that stunned even Boko Haram I. This parallel group had radically different principles and agenda that Boko Haram I simply could not understand.

Quoting from the Press Release of Boko Haram I/The Yusuffiyah movement in 2011 as stored in Wikileaks US docs[https://wikileaks.org/gifiles/docs/51/5150849_-africa-fwd-os-nigeria-ct-nigeria-boko-haram-sect-splits-.html]:

Maiduguri – Confusion has crept into the camp of the Islamic sect, Boko Haram which has unleashed a reign of terror in the northern part of the country for several months as the sect has split into two factions. One faction, the Yusufiyya Islamic Movement, YIM, has vowed to expose the other faceless group, which it described as evil group.

The Yusufiyya group is made up of followers of slain leader of the Islamic sect, Mallam Mohammed Yusuf.

This development came as President Goodluck Jonathan, yesterday, held talks with elders from Borno State, over growing insecurity in the state, which is believed to be the abode of the sect.

The Yusufiyya Islamic Movement, in a two-page statement contained in leaflets yesterday, condemned the attacks and bombing of residences and places of worship by the other sect that claimed to be fighting a Jihad in the North. The leaflets were distributed on Tuesday to the various wards, Post Office Area and media houses in Maiduguri, Borno state capital.

The leaflets read in part: “The Yusufiyya Movement has come to mean different things to different people in the last few months. This confusion and misinterpretation have made it necessary for us to come out publicly with the clear truth regarding our concept, struggle, aim and ultimate objective, as our declaration would guide in distinguishing the Yusufiyya movement from the various labels ascribed to us, as the Boko Haram.

This is necessary in the light of genuine concern by individuals and groups to the mass suffering of innocent citizens caught in the cross fire between our members and the Nigerian troops. This concern has again brought to the fore, the daunting issue of reconciliation, through dialogue, with the Nigerian authorities and individual leaders involved in the naked abuse of our birthright to the peaceful propagation and practice of our religion as we understand it.”

The sect argued that it was in the process of exercising their right to propagate their religion as they understood it, that their leader, Mohammed Yusuf was killed as well as the destruction and confiscation of their landed and moveable property in Maiduguri. Following their leader’s murder, the members therefore “resolved to wage a struggle between justice
and injustice, between truth and falsehood, right against wrong, in which the sect was sure of victory.”

The statement, however, noted that the public must know that the Yusufiyya Islamic sect is far from the image of the heartless terrorists, arsonists or sadistic robbers painted by other people with a distinct agenda, saying “it is therefore unbecoming to attribute attacks on the civilian population or places of worship to our group, the Yusufiyya Islamic Movement”.

Referring to the factions in the Boko Haram sect, the statement further explained that; “ours is a clear fight for the blood of our founder, Mohammed Yusuf and other leaders who were slain in cold blood by former governor of Borno State (names withheld), the former Borno state commissioner of police and the late President”, adding that the former president “has since been seized by Allah in an answer to the sect’s prayer for support against his aggression”.

“We therefore distance our group from all the bombings targeted at civilians and other establishments and equally condemn them and pray that Allah expose those who perpetrated them and attributed them to us.”

Exonerating the Yusufiyya sect from other factions of Boko Haram sect, the statement declared: “We are concerned that some people with evil motives have infiltrated our genuine struggle with a false holy war that is outright un-Islamic. We call on this evil group to desist, failing which we shall have no option than to expose and hunt them.

“Finally, we have resolved to temporarily halt our fight against the assassination of our leaders in compliance with the prohibition of fighting in the holy month of Ramadan.”

Clearly Boko Haram II had been invented and was well supported, sponsored and had only one agenda: to kill and destroy the north and displace all inhabitants off the land. Boko Haram I was shocked by Boko Haram II; could not understand who was behind them and where they came from and totally rejected their ways as deviant, extreme, unIslamic and surprising. As read above, Boko Haram I even promised to kill Boko Haram II. Boko Haram II was a farce; it never really had anything to do with Islam but just adopted the Boko Haram I platform to hide and perpetrate its ulterior agenda.

Abubakar Shekau I was employed by General Ihejirika and other agents, local and likely foreign to perpetuate programs (a pogrom) to dismantle the north of Nigeria while continuing to deliver the invaluable fragmenting political dividend Goodluck Jonathan had enjoyed when he accused his opponents of the 2010 Abuja independence day bombing.

Boko Haram I, the Yusufyyah movement faded while Boko Haram II, the Ihejirika movement without any notable consistent agenda, flourished and perpetrated mayhem on citizens of the north, Muslim and Christian alike.

At this point, we must realize that Boko Haram II have never suggested a reasonable, possible and consistent agenda. They always ensure they ramble nonsense and stay inconsistent. This is because they have no agenda other than to destroy the north and inflame the polity. The latest “Caliphate” claim was plagiarized from ISIS in Iraq last month, up until then, they made no such claim.

They obviously knew they could never conquer Nigeria and Islamize the entire nation; and they never set out to. They destroyed all local farmers and sources of food for their own sustenance, which proved they had no long-term territorial rulership agenda. No one kills and burns the homes of people they wish to reign over an; and destroys and displaces the farmers who will feed their “nation.” Boko Haram II simply set-out to kill all farmers especially (the only/main resource of the north) from Borno to Benue. They attacked corn and tomato farmers in Borno and rice farmers in Benue. They killed and destroyed cattle rearers across the Middle Belt. Over five years of free operation under the supervision of ex-Army Chief Ihejirika, Boko Haram II succeeded in killing over 100,000 Nigerians residing in the north and displacing over 4 million farmers; the third largest human displacement in recent global history.

Boko Haram II were armed by the Nigerian army under General Azubuike Ihejirika. They obtained armored tanks, APC’s and weapons from the armory which the Nigerian army ensured never to destroy, even though everyone in Borno knew the Boko Haram camps where these weapons and vehicles were and still are kept in plain sight. It can be recollected that when 234 girls/Angels were abducted from Chibok and the Nigerian army claimed they did not know where the girls were, it was our ENDS organization that revealed the camps in Sambisa forest to the entire world, and made every one cognizant with the fact that these camps were well known, had generators, fridges, TV’s and the like and that the Nigerian army has been tolerating these camps and the survival of Boko Haram II for the past five years of the Goodluck Jonathan government. [Our article of 24th April, 2014: National Security Update: Details Of The Sambisa Camps Holding Our 200 Abducted Daughters URL: http://ends.ng/?p=848]

With the abduction of 234 Angels from Chibok, it is evident Boko Haram II has outwitted itself. The prayers of the oppressed girls no doubt have begun to unravel the sect in miraculous ways.