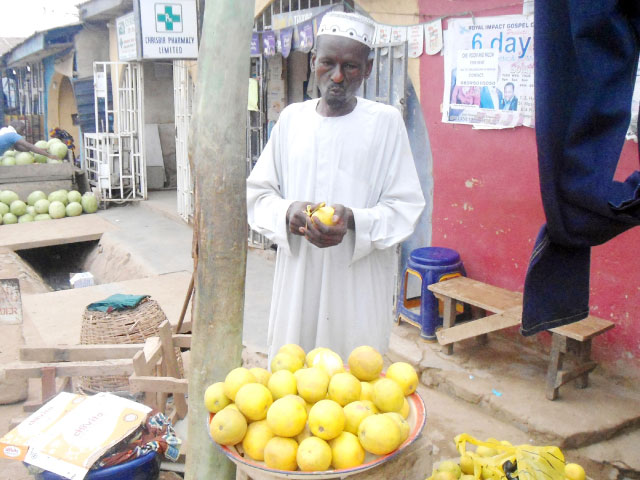 NewsRescue- There was apprehension over the weekend as an alleged food poisoning rumour, supposedly by the Boko Haram sect went viral again on social networking medium.

Boko Haram, which literally translates as “Western culture is sinful”, is a sect that has claimed responsibility for many bomb attacks and killings in Nigeria.

A message on BBM, Nairaland, facebook and other social networking medium, has it that somebody called from a particular state in the North of Nigeria to leak the secret to his loved ones.

Findings by NewsRescue revealed that people, especially in Lagos, have been making frantic calls to their family and relatives not to patronize the Hausa fruits sellers, popularly called Abokis in Lagos.

The fruits, such as apple, carrots, water melon etc numbering over 50,000 were said to be poisoned in an alleged plot by the Boko Haram sect to declare a ‘Holy Jihad’ against the Southerners.

This reporter received a message today from a friend who got it via Blackberry group messaging.

“News Alert: Pls do not eat carrot, apple, water melon and some other fruits coming from the NORTH. We received a report that BOKO HARAM has sent over 54,000 apples to the South-West for sale and it has been poisoned with chemicals. Somebody just called from the North now. Pls send to as many people as you know.”

The rumour is generating controversy as many people are divided over its veracity. While many believe it’s a hoax, others believe it should not be treated with levity.

How true is the rumour that the Boko Haram sect is planning to declare ‘holy war’ on Southern Nigeria, where most Christians are concentrated, and might use food poisoning tactics to kill as many as possible?

FOOD/FRUITS  POISONING RUMOUR: HOW IT ALL STARTED

Last month, Bishop Emmanuel Chukwuma, CAN Chairman and Anglican Bishop of Enugu Diocese, was reported in the media to have warned that Boko Haram, responsible for killing hundreds of Christians since 2011 with church bombings and shootings, was planning to lace meat in these southern areas with poisonous powder.

CAN specifically warned residents to be careful about eating Suya, a popular  roasted meat that can be made with various types of meats.

“That is part of the information available to us now. There is a powder that is now being imported which they will spread on Suya and after two weeks it will start eating your liver and other organs. We have gotten that information also.”

There is yet to be any evidence that this so-called intel has any credence to it. And many see these more often than not, totally fake stories as a  purposeful ploy to fan the fires of sectarian strife in Nigeria

THE INNOCENT ‘ABOKI’, FRUIT SELLER IN LAGOS AND LOSS OF PATRONAGE

Although the veracity of the food poisoning scare has not been ascertained, fruits sellers, especially in Lagos, have begun to encounter loss in patronage leading to poor bottom line.

NewsRescue authoritatively gathered that since the rumoured news filtered in on BBM and other social networking medium, many have abstained from patronizing them.

This calls for concern as more innocent Hausas trying to make ends meet in the South continue to have unnecessary issues with their business.

The scare has further compounded the hatred for the Hausas hustling to make ends meet in Lagos as many of them have earned a new appellation. It is not uncommon to hear them called Boko Haram in Lagos.

Reacting, a man identified as Ergo on Niaraland.com expressed annoyance at the rumour .Hear him: “Who among the people talking here has actually seen a person dead or poisoned as a result of eating Hausa product?

“Personally I have not! This food poisoning thing does not just make logical reason to me at all, though Boko Haram themselves are not logically reasonable!

OPTIONS: VETTING FOOD PRODUCTS FROM THE NORTH AND “TASTE-IT-FIRST” APPROACH

Although no death has been attributed to the fruit poisoning rumour, the nation’s agricultural system calls for stricter control and regulation.

According to a graduate of Animal Science, Mr Fisayo Soyombo who spoke with this reporter, “If there are officials who inspect animals to be slaughtered at abattoirs, who says we cannot have the same for crops?

He went further : “The solution — whether this rumour is true or not — is to have a confidence-engendering system where agriculture receives improved government attention.

“We should begin to look into having professional agriculturists examine crops at their point of arrival at major markets.

“But it will take a great deal of planning for us to get there, especially in a society as unplanned and unregulated as ours. We are talking of coordinating all food distribution channels into a single chain such that no line of market produce gets to the market without the inspection of their samples. It’s a lot of work but we can get there with great planning and an equal measure of seriousness.

RUMOUR OR NOT, BE ALERT!

Other respondents have advocated a “taste-it-first” approach before buying Suya .

“Don’t take chances with Boko Haram sect. Henceforth, when buying Suya, ask the aboki guy to taste from it for confirmation, before paying. It is better to be proactive than to be the first casualty,” said an unidentified person on Nairaland.

“When one considers the fact that more important food items such as beans, groundnut, and maize – important because they are associated with the majority – are also brought from the North in large quantities, then the impact of such allegations (if true) can only be imagined.

“Lets be careful with what we eat!! It’s an allegation, but let’s keep our fingers crossed.”