Residents of Maiduguri, the Borno State capital, said suspected members of Boko Haram on Monday killed 22 persons in separate attacks. They said the terrorists were on a revenge mission against youth vigilante groups that have been hunting them.

The gunmen on Monday at about 3 p.m. attacked a secondary school, Ansarudeen Private School, Maiduguri, and opened fire on students writing their final year exams. Nine students were killed, while several others were seriously injured in the attack, residents of the area said.

The incident occurs less than 24 hours after gunmen attacked a school in neighbouring Yobe State, killing seven students and two teachers. Borno and Yobe, alongside Adamawa, are under emergency rule with a massive deployment of soldiers to the states.

In another incident in Borno on Monday, the gunmen attacked a group of fishermen on the banks of the Alau River, on the outskirts of Maiduguri, killing 13 of them.

Some of the witness who were spared by the attackers said most of those killed at the river bank were relatives of the youth vigilante group currently hunting Boko Haram members.

“I was lucky to be left out because I am not a resident of Gwange or Hausari where the Civilian-JTF (the youth vigilante) came from,” said a fisherman, who pleaded anonymity for security reasons.

A resident of Bulumkutu in Maiduguri, Inuwa Umoru, said a prominent fish merchant, Garba Garus, was among the 13 killed.

“We were busy fishing at Alau River when suddenly a gang of gunmen appeared from nowhere, rounded us up and asked all those who are residents of Husari and Gwange to fall on one side. After sorting us out, they said, “Your children brought this fate upon you; they are busy catching our members and handing them to soldiers to be killed.” 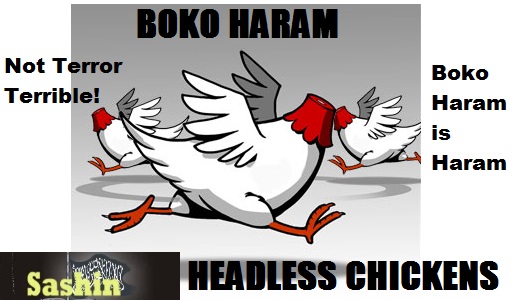 “They then shot them dead and asked the remaining of us to run for our lives and take the message to the youth vigilante,” he narrated.

A top security official in the state, who pleaded anonymity, confirmed the attacks but declined further comments on the number of casualties.

The youth vigilante have been commended by President Goodluck Jonathan and the Nigerian military for helping in the battle against the terrorists.

The JTF spokesman in Borno, Sagir Musa, could not be reached on telephone for official reactions to the incidents. –Saharareporters

Abu Zinnira said his group is also waging a bloody war against the government of Borno and Yobe States in reaction to the massive arrest of their members by youth in the states.

The terrorists’ spokesman, stated these in a statement written in Hausa and emailed to journalists.

He added that they are waging a war against the Nigerian state in order to establish a Sharia legal system. He said while they maintain their hostility against the police, soldiers, politicians and other symbols of authority, they have now added the youth in these states to their kill-list.

“We have established that the youth in Borno and Yobe states are now against our course. They have connived with security operatives and are actively supporting the government of Nigeria in its war against us. We have also resolved to fight back,” he said.

Some members of the youth groups, who did not want their identity disclosed for security reasons, have also vowed to continue their fight against the Boko Haram insurgents in Maiduguri, saying that they will not be deterred from carrying out their mission and there will be no going back.