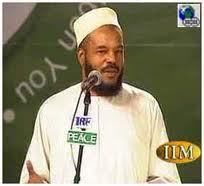 A renowned Islamic scholar, Bilal Philips, has condemned the extremist group, Boko Haram, saying contrary to the group’s claim of being against western education, it is the sect’s logic and reasoning that is forbidden in the eyes of Islam.

Mr. Philips described the insurgent group as being Haram themselves. “Boko Haram are Haram,” he said.

The word Haram is an Arabic word for “forbidden”, and Boko Haram which has killed thousands mainly in northern Nigeria since 2009, has as its central belief that the acquisition of western education is forbidden.

Mr. Philips, who delivered a lecture Sunday in Abuja under the theme: The Prophet; the ideal role model for all time, stated that members of the sect are ignorant of Islam.

“You cannot kill innocent kids at school and claim to be Muslims, this has driven you out of Islam because your action is an act of disbelief in itself,” he said.

The scholar said members of the sect have no conscience and it is only ignorance of Islam that will allow them “do this kind of atrocity”.

He said Muslims are expected to oppose policies only through peaceful constitutional means by bringing their view point to relevant organs of government through their trusted representatives.

He stated that Prophet Muhammad always preached peace and only fought when necessary and often times to bring peace to the community.

The moral message of Prophet Muhammad

Mr. Philips said Prophet Muhammad represented a blessing to Muslims. He said the greatness of Islam lies in its message to human kind, arguing however that the moral message of the Prophet has been greatly undermined.

He advised Muslims to hold unto the Islamic morality. He said democracy as advocated in many countries today allows for majority view, saying however that since the majority decide what is acceptable, morals tend to change based on the view of the people at any given time.

He said morality is law now which leads to moral chaos in the world. On the other hand, he said Islam stands by the moral principles set by the prophet.

The scholar gave example with the ongoing debate about homosexuality and how views about it have changed over time. He said homosexuality was considered a sickness by psychiatrist in the west.

“40 years ago, the average westerner would have told you that homosexuality is nasty, evil, and that even the Holy Bible consider it an abomination unto The Lord.

“By late 70s, the tables have turned and the concept was removed from the psychiatrist bible, homosexuality is now considered an alternative lifestyle, and whoever oppose it is the one now described as being sick,” he said.

He said homosexuality is now replaced with homophobia, adding that in many countries of the west today, fornication, adultery and even incest are decriminalized and they are not considered as crime.

He added that morality has now become subjected to democracy.

“Democracy has a lot of benefit because it allows for majority views, but when it infringes on what is right or wrong, it becomes a problem,” he said.

Mr. Philips said the message of Islam as propounded by the prophet is fundamentally a moral message. He stated that the message of Islam is that whoever killed a human being must be killed in order to avoid further killing, adding however that Islam forbids killing of animals for sport.

The scholar advised Muslims to be open. He said the five pillars of Islam- shahadah, salat, fasting, hajj and zakat- we’re essentially for the benefit of human kind.

He urged Muslims to share knowledge and live exemplary lives because they will be called to account.

Quoting from the Quran and Hadith, Mr. Philips said Allah will place a brick from hell fire over any Muslim that hides knowledge. “Muslims are obliged to inform others about Islam,” he said.

The rise of Islam

Mr. Philips called on Muslims not to “feel bad, give up hope or despair” he said the apparent on going media war against the religion is a sign that Islam is on the rise.

“The prophet faced all sorts of opposition but he did not give up. Forty years ago, Islam is not mentioned in the media, so talking about it constantly is a good sign,” he said.

He said Muslims will continue to succeed as long as they follow the path of the prophet.
“Islam is a living faith, not just a set of norms and rituals,” he said.